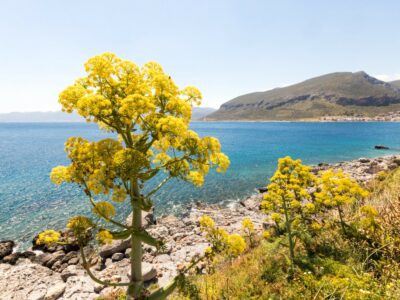 What if there was a perfect plant? One whose stalks and roots were delicious whether roasted, sauteed or boiled. A plant with the medicinal qualities to treat a variety of ailments and flowers so aromatic they made the most delectable perfume. In ancient times such a treasure existed. It was the silphium plant.

Believed to have been a fennel-like plant belonging to the genus Ferula, Silphium had a hollow stem, tiny yellow umbels of flowers and golden celery-like leaves. Its stout roots were covered in black bark and the silphium heart-shaped seeds are credited with inspiring the connection between the heart shape and love.

In the ancient Mediterranean world, this plant had many uses in addition to food, medicine and perfume. The juice of the silphium plant was a potent aphrodisiac and possibly an effective method of birth control. The dried sap was grated, then used as a seasoning for a variety of dishes. As a forage plant, silphium was credited with producing sheep that had tender meat.

Also known as silphion, laserwort or laser, this plant was treasured by both ancient Greeks and Romans. Pound for pound, it could fetch the price of silver or gold. It was so highly valued, Julius Caesar kept a stash of it in the treasury and the image of silphium was engraved on ancient Greek coins.

Although it was the most renowned medicinal plant of the ancient Mediterranean world, many believe Silphium is extinct. Historical accounts report the last known silphion plant in existence was sent to the Roman Emperor Nero around AD 50.

The silphium plant was indigenous to a 125 mile (201 km.) strip of land in the fertile highlands of Cyrenaica, a region of Libya which borders the Mediterranean sea. For unknown reasons, attempts to cultivate silphium failed.

Modern theories suggest several possibilities for this failure. Perhaps the silphium seed required special treatment to germinate. Or like huckleberries, silphium may have spread by underground rhizomes which don’t root when replanted.

It’s also possible this highly prized plant was a hybrid. The heart-shaped silphium seed may have been sterile. If hybrid seeds do germinate, they seldom produce offspring with the same characteristics as the parent plant.

Whatever the reason, the inability to cultivate this plant created a monopoly on silphium exports to Europe. This not only generated wealth for the town of Cyrene, but also drove up silphium’s trade value as demand far exceeded the limited supply of wild plants.

It’s believed overgrazing and over harvesting led to the silphion plant’s demise. Yet, some experts feel there is still hope this plant exists. After all, it’s possible a few plants could have escaped the clutches of ancient humans and hungry livestock.

To date, few scientific studies have focused on the plant diversity in this region of Libya.

So perhaps one day, this rock-star of a plant will be rediscovered and the world will once more know the benefits of the silphium plant.