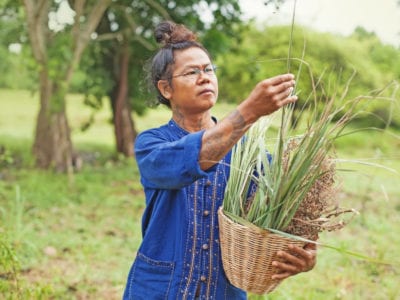 Lemongrass (Cymbopogon citratus) is a commonly grown herb. Both its stalk and foliage are used in many prepared dishes such as teas, soups, and sauces. While it is easy to grow and care for, some people are not sure about when or how to go about picking lemongrass. In fact, lemongrass harvesting is easy and can be done nearly anytime or year-round when grown indoors.

Lemongrass is commonly used to add flavor and aroma to food. However, it is typically the stalk which is most often utilized and edible. Since the stalks are somewhat hard, they’re normally crushed in order to allow the lemony flavor to come through when cooking. Only the tender part inside is considered edible, so once it’s cooked, it can be sliced and added to various dishes. This tender portion also tends to be located towards the bottom of the stalk.

How to Harvest Lemongrass

Harvesting lemongrass is simple. While you can harvest lemongrass pretty much at any time throughout its growing season, in cooler regions, it is normally harvested towards the end of the season, just before the first frost. Indoor plants can be harvested throughout the year.

Keeping in mind that the most edible part is near the bottom of the stalk; this is where you’ll want to snap or cut off your lemongrass. Begin with older stalks first and look for those that are anywhere between ¼ to ½ inch (6 mm. to 1 cm.) thick. Then either snap it off as close to the roots as possible or cut the stalk at ground level. You can also twist and pull the stalk. Don’t worry if you wind up with some of the bulb or roots.

After you have harvested your lemongrass stalks, remove and discard the woody portions, as well as the foliage (unless you intend on using and drying the leaves for teas or soups). While most people pick lemongrass to use right away, it can be frozen for up to six months if needed.

Now that you know a little more about lemongrass harvesting, you can pick this interesting and tasty herb to use for your own cooking.