What Is Mint Rust: How To Treat Rust On Mint Plants 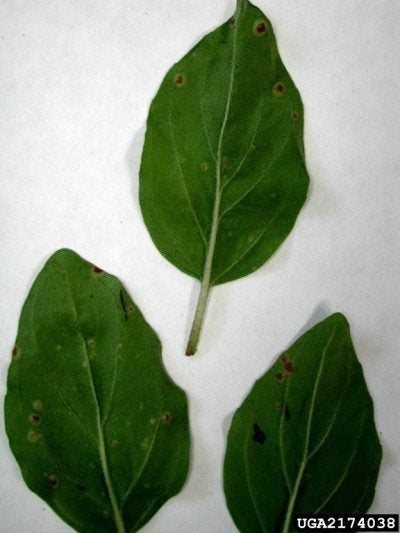 A kitchen garden feels empty without a decent collection of herbs, including many varieties of mint. These hardy plants are capable of producing a wide range of flavors for drinks and bakery goods and require little care. For keepers of mint, rust fungus is just one of a few serious diseases to bear in mind. Keep reading for information on mint rust symptoms and how to treat this disease.

What is Mint Rust Fungus?

Mint rust is caused by a fungus, Puccinia menthae, which only infects plants in the mint family, especially spearmint and peppermint. It is encouraged by overhead irrigation, which frequently allows water to stand on plant leaves long enough for the fungal spores to germinate. Closely planted mints, or those that need to be thinned, are at a heightened risk due to increased humidity around the plants.

Rust on mint plants looks similar to other rusts in later stages, with orange to rust-colored spots covering the undersides of lower leaves in early spring. Mint rust symptoms may progress, manifesting as leaves that turn completely brown and drop from affected plants. In late summer and early fall, when these dropped leaves regrow, darker spots often appear instead. The very early stages of mint rust may appear as white bumps on mint leaves.

There are many ways to control mint rust, depending on your preferred method of management. Organic gardeners and those looking to preserve beneficial insects may want to destroy infected mint plants or remove infected leaves if the disease is mild. Any rust-infected tissues should be immediately burned or double bagged, and all plant debris kept away from your mint to discourage re-infestation.

Thinning your mint stand will allow better air circulation that can dry out rust fungus without the use of fungicide. Changing the way you water will slow or even stop rust fungus; always water mint at the base, never on the leaves, and do it early in the day so water will evaporate quickly. Potted mints shoved into corners should be brought away from walls and fences.

When cultural modifications fail, you may want to consider chemical control. You’ll have to wait a number of days, anywhere from a week to about three months to harvest leaves after the final treatment, so only apply fungicide when absolutely necessary. Give cultural controls a week or more to work before moving to stronger control methods.

Azoxystrobin can be applied to infested leaves and only requires a week between treatment and harvest, though it may work more effectively when rotated with myclobutanil or propiconazole (both require a month before safe harvest). Ornamental mints can be treated with chlorothalonil; the 80-day wait to harvest won’t render the plants useless.