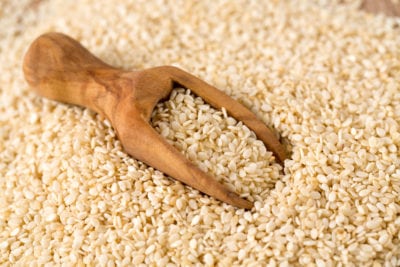 Have you ever bitten into a sesame bagel or dipped into some hummus and wondered how to grow and harvest those tiny sesame seeds? When are sesame seeds ready for picking? Since they are so tiny, picking sesame seeds can’t be a picnic so how is sesame seed harvest accomplished?

When to Pick Sesame Seeds

Ancient records from Babylon and Assyria have attested that sesame, also known as benne, has been cultivated for over 4,000 years! Today, sesame is still a highly valued food crop, grown for both the whole seed and the extracted oil.

A warm-season annual crop, sesame is drought-tolerant but does need some irrigation when young. It was first introduced into the United States in the 1930’s and is now grown in many parts of the world on over 5 million acres. All very interesting, but how do growers know when to pick sesame seeds? Sesame seed harvest occurs 90-150 days from planting. Crops must be harvested prior to the first killing frost.

When mature, the leaves and stems of sesame plants change from green to yellow to red. The leaves also start to drop from the plants. If planted in early June, for example, the plant will begin dropping leaves and drying out in early October. It still isn’t ready to pick, though. It takes a while for the green to disappear from the stem and upper seed capsules. This is referred to as ‘drying down.’

How to Harvest Sesame Seeds

When ripe, sesame seed capsules split, releasing the seed which is where the phrase “open sesame” comes from. This is called shattering, and until fairly recently, this characteristic meant that sesame was grown on small plots of land and was harvested by hand.

In 1943, development of a high yield, shatter resistant variety of sesame began. Even as sesame breeding has soldiered on, harvest losses due to shattering continue to limit its production in the United States.

Those intrepid souls who do cultivate sesame seeds on a larger scale generally harvest the seed with a combine using an all crop reel head or a row crop header. Given the tiny size of the seed, holes in combines and trucks are sealed with duct tape. Seeds are harvested when they are as dry as possible.

Due to the high percentage of oil, sesame can turn quickly and become rancid. So once harvested, it must move quickly through the sales and packaging process.

In the home garden, however, the seeds can be collected prior to splitting once the pods have turned green. They can then be placed into a brown paper bag to dry out. Once the pods are completely dry, simply break up any seed pods that haven’t already split open to collect the seeds.

Since the seeds are small, emptying the bag into a colander with a bowl beneath it can catch them as you remove the leftover seedpods. Then you can separate the seeds from chaff and store them in an airtight container in a cool, dark location until ready to use.