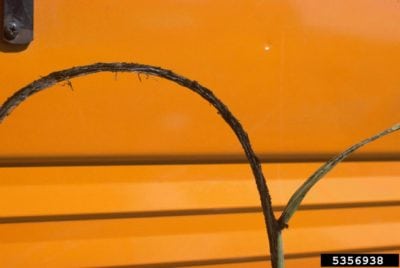 Sugarcane is grown primarily in the tropical or subtropical areas of the world, but it is suitable for USDA plant hardiness zones 8 through 11. Although sugarcane is a hardy, prolific plant, it can be plagued by a number of sugarcane diseases. Read on to learn how to identify several of the most common.

Is my sugarcane sick? Sugarcane is a tall perennial grass with thick canes and feathery tops. If your plants are displaying slow or stunted growth, wilting, or discoloration, they may be affected by one of several sugarcane diseases.

What’s Wrong with My Sugarcane?

Red Stripe: This bacterial disease, which shows up in late spring, is indicated when leaves show distinctive red streaks. If red stripe affects individual plants, dig them up and burn them. Otherwise, destroy the entire crop and plant a disease-resistant variety. Be sure the soil drains well.

Banded Chlorosis: Caused primarily by injury due to cold weather, banded chlorosis is indicated by narrow bands of pale green to white tissue across the leaves. This disease of sugarcane, while unsightly, usually doesn’t do significant damage.

Smut: The earliest symptom of this fungal disease, which shows up in spring, is grassy shoots with small, narrow leaves. Eventually, the stalks develop black, whip-like structures and spores that spread to other plants. If individual plants are affected, cover the plant with a paper sack, then carefully dig it up and destroy by burning. The best way to prevent smut is by planting disease-resistant varieties.

Pokkah Boen: A relatively insignificant fungal disease, pokkah boen shows up with stunted growth, twisted, crumpled leaves, and deformed stems. Although this sugarcane disease can cause plant death, the sugarcane may recover.

Red Rot: This fungal sugarcane disease, which shows up in midsummer, is indicated by withering, red areas marked with white patches, and an alcohol smell. Dig and destroy individual plants, but if the entire planting is affected, destroy them all and don’t replant sugarcane in the area for three years. Planting disease-resistant varieties is the best prevention.