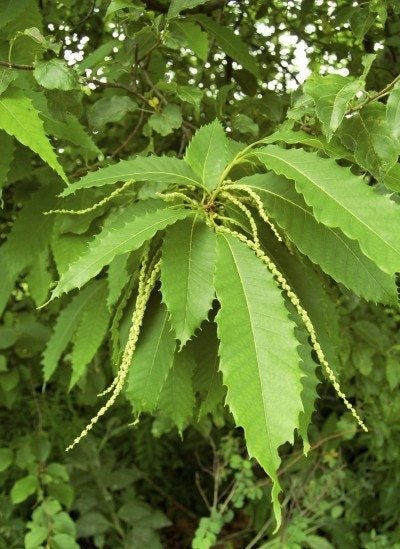 It can take ten years to appear, at which time, it kills the aboveground part of the tree. The roots survive but they store the fungus, meaning any new shoots the roots put up will experience the same problem. So how can you go about planting American chestnut trees? First of all, the fungus is native to the eastern United States. If you live elsewhere, you should have better luck, although it’s not guaranteed the fungus won’t also strike there.

Another option is to plant hybrids that have been crossed with Japanese or Chinese chestnuts, close relatives that are much more resistant to the fungus. If you’re really serious, the American Chestnut Foundation is working with growers both to fight the fungus and to form new breeds of American chestnut that are resistant to it.

Pure varieties have an extremely high germination rate and should grow fine this way. Some hybrids don’t germinate as well, and can be started indoors. Plant the nuts as early as January in pots at least 12 inches (31 cm.) deep.

Harden them off gradually after all threat of frost has passed. Plant your trees in very well drained soil in a spot that receives at least six hours of light per day.

American chestnuts can’t self-pollinate, so if you want nuts, you need at least two trees. Since the trees are a many year investment and don’t always make it to maturity, you should start out with no fewer than five to ensure that at least two survive. Give each tree at least 40 feet (12 m.) of space on every side, but plant it no farther than 200 feet (61 m.) from its neighbors, as American chestnuts are pollinated by the wind.