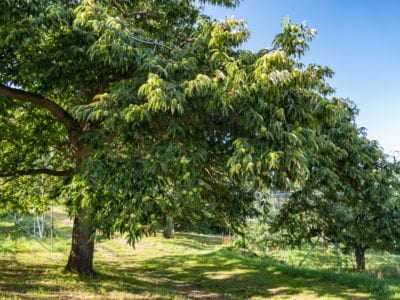 Very few trees are completely disease-free, so it’s no surprise to learn the existence of diseases of chestnut trees. Unfortunately, one chestnut disease is so serious that it has killed off a large percentage of the chestnut trees native to the United States. For more information on chestnut tree problems and tips on treating a sick chestnut, read on.

Blight – One of the deadliest diseases of chestnut trees is called blight. It is a canker disease. The cankers grow fast and girdle branches and stems, killing them.

The noble U.S. native, American chestnut (Castanea dentata), is a huge, majestic tree with a straight trunk. The wood is beautiful and highly durable. Its heartwood can be counted on in any situation where decay is a potential risk. American chestnut trees made up about half of all eastern hardwood forests. When blight reached this country, it decimated most of the chestnuts. Treating a sick chestnut is not possible if the problem is blight.

Leaf spot presents as small spots on chestnut leaves. The spots are colored yellow or brown and have concentric rings in them. Sometimes the colored area falls from the leaf, leaving a hole. Sometimes the leaves die and fall. Treating a sick chestnut with leaf spot (Marssonina ochroleuca) is not recommended. Let the disease run its course. It is not one of the chestnut diseases that kill trees.

Twig canker (Cryptodiaporthe castanea) is not one of the chestnut tree problems that you have to stay up nights worrying about either. It is a little more serious than leaf spot. Twig canker attacks Japanese or Chinese chestnuts. The cankers girdle whatever area of the tree they appear on. Treating a sick chestnut with twig canker is a matter of pruning out the infected areas and disposing of the wood.