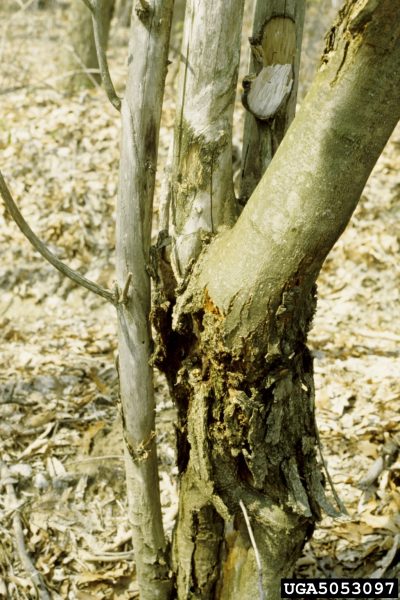 In the late nineteenth century, American chestnuts made up more than 50 percent of the trees in Eastern hardwood forests. Today there are none. Find out about the culprit– chestnut blight– and what’s being done to combat this devastating disease.

There is no effective method of treating chestnut blight. Once a tree contracts the disease (as they all eventually do), there is nothing we can do but watch it decline and die. The prognosis is so bleak that when experts are asked how to prevent chestnut blight, their only advice is to avoid planting chestnut trees altogether.

Caused by the fungus Cryphonectria parasitica, chestnut blight tore through Eastern and Midwestern hardwood forests, wiping out three and a half billion trees by 1940. Today, you can find root sprouts that grow from old stumps of dead trees, but the sprouts die before they are mature enough to produce nuts.

Chestnut blight found its way into the U.S. in the late nineteenth century on imported Asian chestnut trees. Japanese and Chinese chestnuts are resistant to the disease. While they can contract the disease, they don’t show the serious symptoms seen in American chestnuts. You might not even notice the infection unless you strip the bark from an Asian tree.

Infection occurs when spores land on a tree and penetrate the bark through insect wounds or other breaks in the bark. After the spores germinate, they form fruiting bodies which create more spores. The spores move to other parts of the tree and nearby trees with the help of water, wind, and animals. Spore germination and spread continue throughout spring and summer and into early autumn. The disease overwinters as mycelium threads in cracks and breaks in the bark. In spring, the entire process begins again.

Cankers develop at the site of infection and spread around the tree. The cankers prevent water from moving up the trunk and across the branches. This results in dieback from lack of moisture and the tree eventually dies. A stump with roots may survive and new sprouts may emerge, but they never survive to maturity.

Researchers are working to develop resistance to chestnut blight in trees. One approach is to create a hybrid with the superior characteristics of the American chestnut and the disease resistance of the Chinese chestnut. Another possibility is to create a genetically modified tree by inserting disease resistance into the DNA. We’ll never again have chestnut trees as strong and plentiful as they were in the early 1900s, but these two research plans give us reason to hope for a limited recovery.