Using Pecans In The Kitchen: What To Do With Pecans 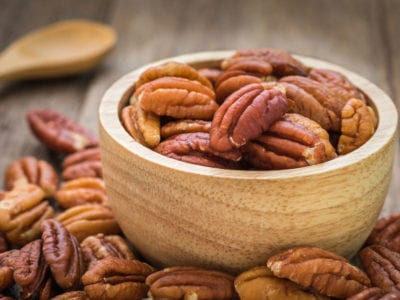 The pecan tree is a hickory native to North America that has been domesticated and is now grown commercially for its sweet, edible nuts. Mature trees can produce 400-1,000 pounds of nuts per year. With such a large quantity, one might wonder what to do with pecans.

Cooking with pecans is, of course, the most common of pecan uses, but there are other ways of using pecans. If you are lucky enough to have access to a pecan tree, read on to learn how to use pecans.

What to Do with Pecans

When we think of pecans, we may think of eating the nuts, but many species of wildlife also enjoy not only the pecan fruit, but foliage as well. Using pecans isn’t just for humans, many birds, squirrels, and other small mammals eat the nuts, while white-tailed deer often nibble on the twigs and leaves.

Beyond our feathered friends and other mammals, pecan nut uses are generally culinary, but the tree itself has beautiful, fine-grained wood that is used in furniture, cabinetry, paneling, and for flooring and fuel. The trees are a common sight in southern areas of the U.S. where they’re used not only for the nuts produced but as valuable and graceful shade trees.

Pecan nuts are used in pies and other sweet treats like candies (pecan pralines), cookies, and breads. They are terrific with sweet potato recipes, in salads, and even in ice cream. Milk is made from pressing the seed and used to thicken soups and season corn cakes. The oil may also be used in cooking.

Turns out that pecan hulls are also very useful too. The nut shells can be used to smoke meats, they can be ground and used in beauty products (facial scrubs), and can even make excellent garden mulch!

The Comanche people used pecan leaves as a treatment for ringworm. The Kiowa people ate a decoction of bark to treat symptoms of tuberculosis.

Pecans are also rich in protein and fat and are used as a supplement for both human and animal diets. Interestingly, ingesting pecans has been said to aid in weight loss. This is because the nut satiates the appetite and increases metabolism.

Pecans, like many other nuts, are rich in fiber too, which helps reduce the risk of coronary heart disease and prevents some types of cancer. They also contain monounsaturated fats, like oleic acid, which are heart-healthy and can reduce the risk of strokes.

Additionally, the high fiber content promotes colon health and encourages regular bowel movements as well as reducing risks of colon cancer and hemorrhoids. Their powerful antioxidants help boost the immune system, while their vitamin E content may lower the risk of Alzheimer’s and dementia.

Printer Friendly Version
Read more about Pecan
<PreviousNext>
Did you find this helpful? Share it with your friends!
FacebookTweetPinEmail
Related Articles
Newest Articles
You might also like…
Additional Help & Information