Picking An Artichoke – When And How To Harvest Artichokes 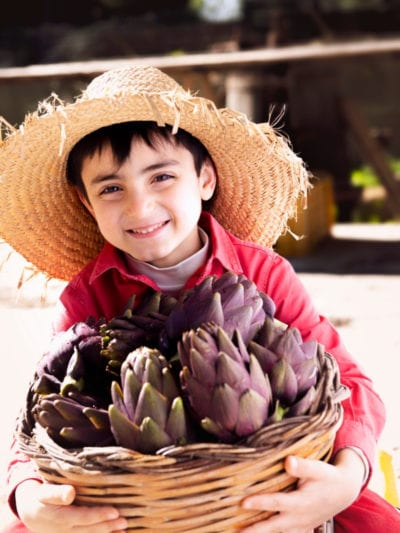 Artichokes (Cynara cardunculus var. scolymus), considered a delightful treat by many, are perennial edible plants that are similar in appearance to thistles. They can grow up to 5 feet (1.5 m.) tall and bear flower buds that look like a dark green pinecone, almost 4 inches (10 cm.) in diameter. A leathery bract surrounds a purple-blue flower.

Most of the nation’s artichokes are grown in the coastal California region because conditions are most favorable. Artichokes like frost-free winters and cool, foggy summers the best. When and how to harvest artichokes in the home garden depends on the type you are growing.

The Jerusalem artichoke (Helianthus tuberosus), a strong growing perennial, is referred to as a sunchoke and is a member of the sunflower family. The edible portion of this crop is underground in the form of a tuber.

When and How to Harvest Artichokes

Artichoke harvest starts in late July or early August and continues well until frost. Buds are generally harvested once they reach full size, just before the bracts begin to spread open.

Harvesting artichokes requires that you cut off the bud along with 3 inches (8 cm.) of stem. Harvesting Jerusalem artichoke tubers is not done until after frost when tubers are dug up from the ground.

After harvest, continue to water and feed the plants. After several frosts, cut back the artichoke plant and mulch heavily.

How Do I Know When to Pick Artichokes?

Have you asked yourself, how do I know when to pick artichokes, even when the timing seems right? If you’re concerned about how to tell when an artichoke is ripe, watch plants very carefully. Once flower buds begin to form, it’s vital to provide the right conditions for the plant so that it doesn’t become stressed.

If you miss the ideal artichoke harvest for Globe and Violetta types and buds are not harvested, they will form a purple flower that can be cut for fresh or dried arrangements.

Although artichokes aren’t difficult plants to maintain, they won’t flower if they don’t receive an adequate number of chilling days. It’s best to plant early to ensure proper growth.