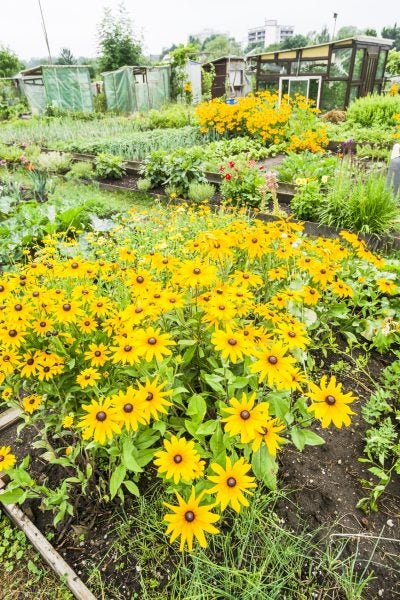 When you hear “edible sunflower,” you probably think of tall mammoth sunflowers and delicious sunflower seeds. However, Helianthus tuberosa, also known as Jerusalem artichoke or sun choke, is a member of the sunflower family that is grown and harvested for its edible tubers, not seeds. Jerusalem artichoke is a perennial growing up to 8 feet (2 m.) tall and wide, and is covered in small sunflower-like flowers throughout the summer. This article will provide information on companion planting with Jerusalem artichokes.

As an ornamental and an edible, Jerusalem artichoke has plant friends or companions in the veggie garden, as well as in flowerbeds. It attracts pollinators, beneficial insects, and birds. However, it also can be prone to aphids. In fact, it is sometimes used as an aphid decoy plant.

Jerusalem artichoke can inhibit the growth of potatoes and tomatoes, so it should not be placed near either of them. Another word of caution, the plant can become invasive if not kept in control.

So what to plant with Jerusalem artichoke?

In the vegetable garden, Jerusalem artichokes can provide shade for sensitive plants like:

Plant Jerusalem artichoke in the sunniest location of the garden and then plant these small crops where they’ll benefit from its shade. Cucumbers can also climb up its strong sturdy stems.

Pole beans are beneficial companions for Jerusalem artichokes; the beans add nitrogen to the soil and, in return, they are able to use the sturdy stems of Helianthus tuberosa for support. Jerusalem artichoke can replace corn in the Native American Three Sisters method of planting, but it also grows well with this vegetable crop.

Some good herb companions for Jerusalem artichokes include:

The contrast of Jerusalem artichoke’s yellow flowers and the bright blue blossoms of borage or chicory is lovely and very eye catching.

In a flowerbed, good Jerusalem artichoke companions are plants that either complement the small sunflowers or contrast them. Along with nearly any perennial grass, the following plants make nice flowerbed neighbors: