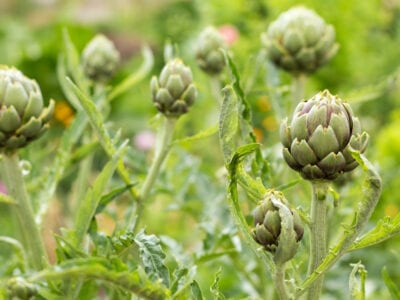 Artichoke plants are one of those prehistoric looking specimens that not only create a visual stir in the garden, but also produce delicious globes and unique purple flowers. The plants are relatively easy to grow and become monsters in the landscape. You may on occasion encounter a few problems with artichoke plants while growing them, and artichoke plants under attack may have insect or disease issues. Learn what to look for and how to deal with artichoke pests and proper care of diseased artichokes.

When you consider the size and roughly serrated, tough leaves of an artichoke plant, it’s hard to see what could harm these mighty thistle relatives. Some of nature’s tiniest organisms can have their way with the plant and there are several fungal diseases that can compromise the plant’s health.

Young seedlings are prone to damping off, which is a soil borne disease that causes seedlings to wilt and die. Flying insect larvae eat all parts of the plant. Sucking insects feed on the sap and creeping snails and slugs make Swiss cheese of the foliage. Artichoke plants under attack by insects may need pesticides, but oftentimes the old “pick and squish” method will keep them from much harm.

A watchful gardener can usually nip artichoke plant diseases in the bud. The most common diseases affect the leaves and include powdery mildew and botrytis. Powdery mildew leaves a white coating on foliage and is caused by fungi, which thrive in moist, warm weather. Botrytis blight is also a fungus but it prefers cool, moist environments and causes the plant to collapse. Curly dwarf virus has a cute name but the effects are detrimental. The virus is transmitted by sucking insects, like aphids, and produces a stunted, sickly plant.

The majority of artichoke plant diseases can be avoided by crop rotation, pest management, and avoiding overhead watering. Some diseases, like verticillium wilt, are common on other crop plants like strawberries and lettuces. Avoid planting near these crops to avoid spreading disease. Care of diseased artichokes may involve removal of afflicted plant parts. Healthy, vigorous plants can withstand most artichoke plant diseases.

Some of the most damaging pests are the sucking insects. These include aphids, mites, scab, and thrips. They can transmit dangerous artichoke plant diseases as well as reduce the plant’s vigor.

Chewing insects reduce the ornamental appeal of the leaves but can also kill the foliage if large numbers attack. Watch for leafhoppers, many forms of moth, cutworms, armyworms, and any other larvae. Do not let slow snails and slugs fool you. Their slow crawl up the stout stems of your artichoke can spell disaster for its leaves. Overnight eating patterns will create a lacy tapestry of foliage, which affects the plant’s ability to gather solar energy.

When you search for artichoke pests, don’t forget to look underneath the huge leaves. The next generation of pest may be in egg form waiting to hatch and get eating. Blast the leaves with water in the morning to remove many insects. Apply horticultural soap or neem oil for heavier infestations and pick off larvae before they can do any serious damage.