What Is Damping Off? 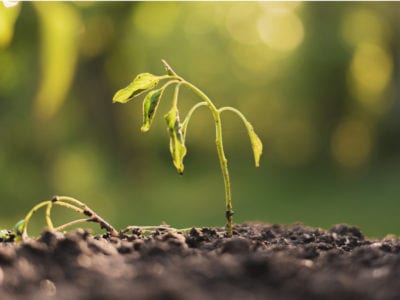 Damping off is a term commonly used for indicating the sudden death of seedlings, often caused by soil-borne fungus stimulated to grow by nutrients from a germinating seed. On rare occasions, however, the sudden death of seedlings may be caused by other factors. Damping off can be alarming to a gardener trying to grow seeds and can leave them asking, “What is damping off?” and “What does damping off look like?” Learning how to prevent the conditions of damping off will help keep your seedling happy and healthy.

What is Damping Off?

Damping off occurs in many types of soil and in various climates. The amount of damage to seedlings depends on the particular fungus, soil moisture, and temperature. Typically, germinating seeds are killed by the damping-off fungus prior to emerging from the ground, and older, more established plants are seldom affected. However, portions of the roots and stems can still be attacked, resulting in poor growth and reduced yields.

So, what does damping off look like? This often depends on the particular fungus. Generally, infected seeds become soft or mushy, turning brown to black in color. Seeds that have already germinated develop brown water-soaked spots.

Seeds may be infected as soon as moisture penetrates the seed coat or later as growth begins. The otherwise healthy-looking seedling will discolor, or wilt suddenly, or simply collapse and die.

Other signs of damping off include stunting, low vigor, or wilting. Foliage of plants may yellow and fall prematurely. The roots of a diseased plant will appear brown or black with evidence of water soaking.

Conditions of Damping Off

Unfortunately, the conditions required for seed germination also create favorable environments for the growth of fungus, as both seeds and roots must be kept moist and warm. The conditions of damping off vary depending on the fungus.

Normally, however, cool, wet soils favor development of the disease. For instance, the fungal disease Pythium root rot occurs with cooler temperatures in poorly drained soils. The lower portion of the stem may become slimy and black. Rhizoctonia root rot occurs with moderate moisture levels in warm to hot temperatures. Infected plants often have sunken lesions on the stem at or below the soil line.

Fungicide to Prevent Damping Off

Various practices may be helpful in reducing the amount of damping off infection. It may help to water less often or apply fungicide to prevent damping off. Fungicides may be applied as a soil drench after planting, incorporated into the soil as a dust before planting, or sprayed in mist form on all seedlings. Once transplanted, only those seedlings known to be especially sensitive to damping off need to be misted with fungicide daily until the first or second seed leaves have emerged.

Another option may include seed treatment. Damping off can be reduced by planting fungicide-treated seed directly into the garden. Other preventative measures include using well-drained soil and avoiding overcrowding of plants. Also, clean out all pots thoroughly before reuse and discard contaminated soil.

Now that you know the answers to what is damping off and what does damping off look like, you can successfully keep it from happening to your seedlings. With a little TLC seed treatment, damping off will be a thing of the past.