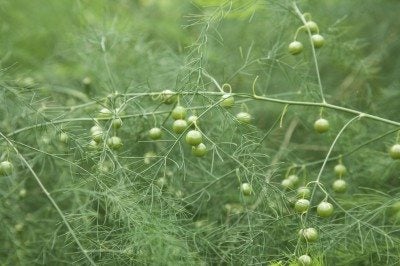 Cultivated for more than 2,000 years both for culinary and medicinal use, asparagus is a wonderful perennial veggie to add to the home garden. A versatile vegetable, asparagus can be eaten fresh, raw, or cooked, or can be frozen or canned. Keep in mind that a little patience is required before you can dive into your culinary masterpieces. It takes a couple of years of ferning out in asparagus before you can harvest it. What is ferning out and why does asparagus fern out?

Ferning out in asparagus is sometimes confused with asparagus bolt. Many veggies will bolt during lengthy periods of hot weather. Meaning that plants such as lettuce, broccoli, or even rhubarb prematurely send up a flower stalk indicating the plant is finished for the season and has gone to seed. Asparagus bolt is really an incorrect term to describe what is actually happening to the asparagus patch, however.

When asparagus first emerges, slim, tender spears appear. These spears are what we harvest and this part of the life cycle lasts four to six weeks in the second year of planting, six to eight weeks in the third year, continuing at that rate for 15 to 20 years! As the spears mature, they become woody at the base while the tips begin to open and develop into fern-like foliage.

Why Asparagus Ferns Out

So what is the purpose of this ferning out phase in the plant’s life cycle? Ferning out in asparagus is actually a good thing, as it indicates that photosynthesis is being promoted, therefore, nutrition production and absorption increases. During the ferning process, the majority of the energy produced is stored in the roots to facilitate new growth the next year.

As the asparagus ferns out, female spears produce green berries that eventually turn red. These berries/seeds, however, are unlikely to produce new plants.

Why is My Asparagus Ferning Out Early?

Ferning, also referred to as “popping,” is similar to bolting in lettuce, hence the misnomer mentioned above. Just as with plant bolting, asparagus that is ferning out early is most likely the result of temperature and weather conditions. The hotter it is, the more rapidly asparagus “bolts” or ferns out.

While you can do nothing about overly hot temps, asparagus may fern out early due to inadequate rainfall as well, which is something you can control. During times of drought, be sure to water once a week or enough to keep the soil moist 2 inches (5 cm.) below the surface.

Plant the asparagus in a raised bed in well-draining soil and mulch around the plants to conserve soil moisture and retard weeds. Once the asparagus has ferned out, cut the foliage back in the fall and mulch heavily with compost to over winter. Remove the mulch in the spring and wait patiently for the delicious, tender shoots to emerge.