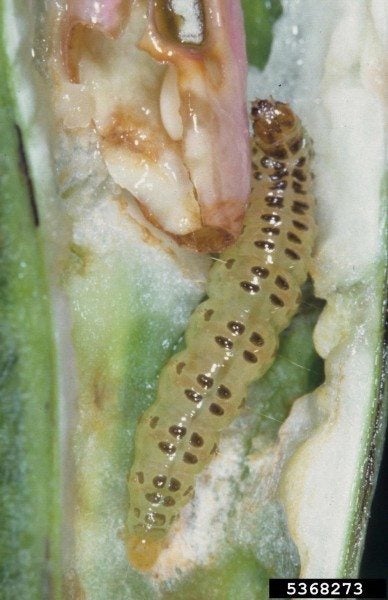 It’s that time of year when the garden is booming with fat beans ripe for the picking, but what’s this? Your lovely legumes seem to be afflicted with borer pests in the beans. This problem may present itself as holes in the pods from bean pod borers or generally weakened plants with caverns carved into the stems, resulting from other bean stem borers.

Bean pod borers such as the lima bean vine borer, also known as the legume pod borer, is a member of the Lepidoptera family. These destructive pests begin their rampage as larvae or grub-like caterpillars, which eventually morph into tiny moths. Lima bean borers may be found throughout the United States, but most commonly along the coastal plane from Delaware and Maryland, south to Florida, and west to Alabama. These larvae are about 7/8 inch (2 cm.) long, bluish green with a pink tinge to the backside and a yellowish brown plate behind the dark head.

Large stemmed bean varieties, such as lima and pole or snap beans, are its favorite fare. Damage from the caterpillars can be major, manifesting in hollowed out pods from munching on the seeds. The young larvae feed on the leaves, leaving tell-tale webbing or excrement in their wake. As the larvae mature, they work their way into the stems of the plant above or below nodes and hollow out cavities, causing the stems to swell, gall, and become woody in texture. All of this obviously affects the vigor of the plant and reduces yields.

These bean stem and pod borers overwinter as pupa near the surface of the soil becoming moths from late April to mid May wherein they deposit their eggs on leaves or host plant stems. A brief two to six days later, the larvae have hatched and are wrecking havoc upon the plants as they develop.

Yet another marauder is called the cornstalk borer. Aptly named, the moth leaves the corn fields when they begin to dry and enters fields of peas and beans. They then lay their eggs at the base of the bean plants, which rapidly hatch into small caterpillars with green, blue, or brown bands around each segmented body. These bean stem borers then enter the plant’s stalk at the base and tunnel up and down with a resulting withering, stunting, and eventual death of the plant.

How to Treat Borers in Beans

One solution for bean borer control is to handpick or snip the caterpillars with shears. Additionally, natural predators of these borer pests may attack the eggs and larvae; among these are parasites, Bacillus thuringiensis, and spinosad.

Rototilling post harvest may also aid in bean borer control. Crop rotation is another recommendation to aid in elimination of these larvae. Lastly, there are foliar insecticidal sprays which should be applied when pods start to form that are effective for control of caterpillars. Follow the manufacturer’s instructions for application.