Leaf Spot On Beans: How To Control Cercospora Leaf Spot In Beans 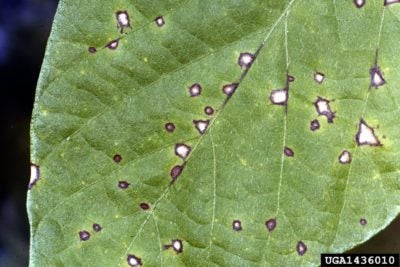 Summertime means so many things, including spending time in the garden and the wicked sunburns that sometimes accompany it. For beans, sunburns aren’t a normal part of summer, so if your bean patch suddenly looks a lot like your sun-exposed arms, you may have cause for concern. Cercospora leaf spot of bean plants can present in a few different ways, but however it comes, it can spell trouble for you and your crop.

As mercury rises, garden diseases become increasingly larger problems. Leaf spot on beans isn’t new, but it certainly can be frustrating to discover that your plants are suddenly infected. When temperatures exceed 75 degrees Fahrenheit (23 C.) and the conditions are humid, it’s important to keep your eyes peeled for problems in the garden.

Cercospora leaf spot in beans can start either as a seed-borne illness, stunting and killing young plants as they emerge, or more commonly as a leaf spot that can spread to bean pods. Sun-exposed leaves often start to look sunburned, with reddish or purplish discoloration and a leathery appearance. Severely affected upper leaves often drop, leaving the petioles intact. Lower leaves may remain unaffected or exhibit only limited fungal spotting.

As leaf spot in beans spreads to pods, the same lesions and discoloration will follow. Pods typically take on a deep purple color. If you open the seed pod, you’ll see that the seeds themselves are afflicted with various amounts of purple discoloration on their surfaces.

Unlike some fungal pathogens in beans, there’s hope that you can beat back cercospora leaf spot if you’re paying close attention. Several fungicides have shown various levels of effectiveness against cercospora, but those containing tetraconazole, flutriafol, and a combination of axoxystrobin and difenconazole seem to be the best.

If your crop has experienced cercospora leaf spot, it’s important to take steps to prevent it in the future instead of relying on fungicide to beat it back year after year. Start by removing old bean debris as soon as it’s noticed since this is the source of many of the spores that will become infections next season.

Practicing a one- to two-year crop rotation with corn, grain, or grasses can also help, but avoid using any legumes for green manure because they may be susceptible to the same pathogen.