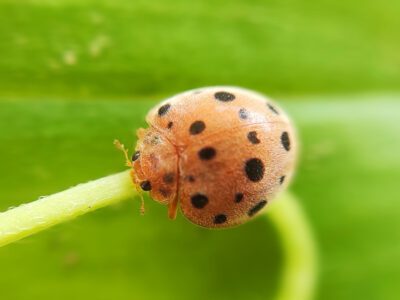 Ladybugs are a gardener’s best friend, eating aphids and generally brightening up the place. Although most of the members of family Coccinellidae are useful garden allies, the Mexican bean beetle (Epilachna varivestis) can be devastating to plants. Keep reading for information on Mexican bean beetle control to prevent bean beetle damage in your garden.

Mexican bean beetles are found throughout the United States, east of the Rocky Mountains, but are believed to have originated in Mexico. These beetles thrive in locations where summers are wet or agricultural areas where a lot of heavy irrigation is required. Spotted, orange-red adults emerge by midsummer, seeking lima, snap, and soybean plantings where they lay their eggs in groups of 40 to 75 on the undersides of leaves.

Both adults and larval Mexican bean beetles feed on bean foliage, chewing the tender tissue between veins from the leaf’s underside. Upper surfaces may yellow and areas where tissues were chewed down to a very thin layer may dry up and drop out, leaving holes in leaves. When feeding pressure is high, leaves will drop and plants may die. Large populations of bean beetles spread out from the leaves to attack flowers and pods as their numbers grow.

A gardener faced with beans under heavy attack may wonder if control of bean beetles is possible, but there are several options suitable for every kind of garden. Organic gardeners wondering how to keep bean beetles off plants have options like floating row covers, installed before the beetles move into the area. Although row covers can become cumbersome during harvest, they prevent bean beetles from setting up shop on beans.

Selecting early season varieties of beans with bushing habits allows you to grow lots of beans before the Mexican bean beetles have started emerging from their winter’s rest. By the time the insects are seeking places to feed, your beans will have already been harvested. If you immediately plow spent plants, it will help to keep bean beetle numbers low by depriving them of food.

Insecticides often appear to fail because bean beetles migrate throughout the season, resulting in seamless waves of new pests despite treatment. If you choose to use insecticides, make sure to respray your beans before the residual effects of the prior poison application wear off, otherwise, the next immigration of beetles may destroy your beans. Labeled pesticides include acephate, acetamiprid, carbaryl, dimethoate, disulfoton, endosulfan, esfenvalerate, gamma-cyhalothrin, lambda-cyhalothrin, malathion, methomyl, and zeta-cypermethrin.