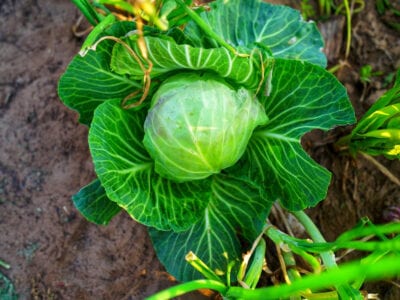 The trick to growing cabbage is cool temperatures and steady growth. That means regular irrigation to keep the soil evenly moist throughout the season. Cabbage head splitting is more likely to occur late in the season when the heads are moderately firm and almost ready for harvest. So what causes split cabbage heads and how do you treat these splitting cabbages once it occurs?

Split cabbage heads usually follows a heavy rain, especially after a period of dry weather. When the roots absorb excess moisture after the cabbage head is firm, the pressure from internal growth causes the head to split.

The same thing may happen when the heads are fertilized late in the season. Early varieties are more susceptible to splitting cabbages than late varieties, but all varieties can split under the right conditions.

There are no easy fixes for splitting cabbage so prevention is important. Here are a few things you can do to prevent cabbage head splitting:

When cabbage heads split despite your best efforts to prevent it, harvest the split head as soon as possible. Split heads don’t store as long as solid heads, so use the split heads first.