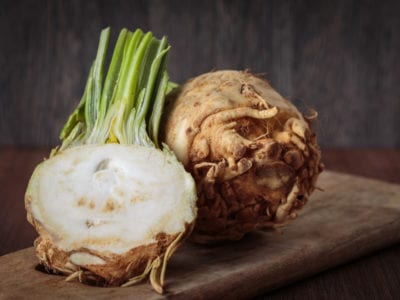 Looking to expand your root vegetable garden? A delightful, delicious root vegetable garnered from celeriac plants just might be the ticket. If you’re reading this from somewhere in North America, it’s very possible that you have never tried or seen celeriac root. So what is celeriac and where does celeriac grow? Read on to learn more.

Where Does Celeriac Grow?

The cultivation and harvesting of celeriac occurs primarily in northern Europe and throughout the Mediterranean Region. Celeriac growing also occurs in North Africa, Siberia, and southwest Asia and even minimally in North America, where the cultivar ‘Diamant’ is most likely cultivated. The plant is indigenous to the Mediterranean and has long been a popular root veggie in a variety of European cuisines.

Although the leaves are edible, celeriac plants are grown for their fairly large root or hypocotyls, which may be harvested when the bulb is about baseball sized to 4 inches (10 cm.) in diameter. Smaller is better in this case, as the larger root tends to become tough and harder to deal with– peeling and cutting, that is. The root is used either raw or cooked and tastes much like common garden variety celery stalks with which it shares some lineage.

Celeriac, Apium graveolens var. rapaceum, is also often referred to as celery root, knob celery, turnip-rooted celery, and German celery. Celeriac plants are cool hardy and the root itself has a lengthy storage life of about three to four months, provided it is stored between 32 to 41 F. (0-5 C.) with moist conditions and the foliage removed. Despite being a root veggie, celeriac contains very little starch comparatively, between 5 and 6 percent by weight.

Celeriac, a member of the parsley family (Umbelliferae), may be eaten sliced, grated, roasted, stewed, blanched, and is especially sublime mashed into potatoes. The exterior of the root is knobby, brown in hue, and must be peeled to reveal the brilliant white interior prior to use. Although cultivated for the flavorful root, celeriac plants are a nice addition to the garden with spring green foliage that is predominantly pest resistant.

Celeriac requires about 200 days until maturity and can be planted in USDA growing zones 7 and warmer in light well-draining loam with a pH of between 5.8 and 6.5. Plant seeds in early spring in a cold frame or indoors four to six weeks prior to transplantation. Celeriac can also be planted in the summer for a winter or spring harvest in some areas.

Seed will take 21 days or so to germinate. Once the seedlings are 2 to 2 ½ inches tall (5-6 cm.), transplant into the garden in a sunny area, spaced 6 inches (15 cm.) by 24 inches (61 cm.) apart, two weeks before the average last frost of the winter. Either mulch them over with straw or leaves to protect the root or set the transplants into a hill.

Fertilize and monitor irrigation of the plants. The root size is compromised by stress, such as drought, but is more tolerant of light frost than its celery counterpart.

Celeriac root can be harvested at most any time, but as mentioned is easier to manage when the root is on the smaller side. Celeriac has maximum flavor after the first frost in the fall and can be allowed to languish in the garden to harvest as needed.

There are several varieties such as:

Different sized roots and harvest times (from 110-130 days) are available from generic to heirloom varietals.