Cucumber Plant Pollination – How To Pollinate Cucumber By Hand

Cucumbers
By: Becca Badgett, Co-author of How to Grow an EMERGENCY Garden
Printer Friendly Version 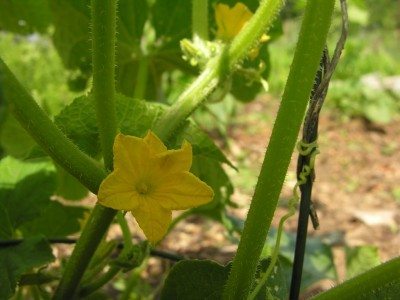 Cucumber plant pollination by hand is desirable and necessary in some situations. Bumblebees and honeybees, the most effective pollinators of cucumbers, usually transfer pollen from male flowers to the female to create fruits and vegetables. Multiple visits from the bees are required for good fruit set and properly shaped cucumbers.

Why You May Need to Use Hand Pollination of Cucumbers

Cucumber pollination may be lacking in the garden where many varieties of vegetables are planted, as cucumbers aren’t a favorite vegetable of pollinators. Without their pollination, you may get deformed cucumbers, slow growing cucumbers, or even no cucumber fruit at all.

How to Pollinate Cucumber

Cucumber plant pollination, when done by hand, can be time-consuming, but if a crop of large, mature cucumbers is desired, hand pollinating cucumbers is often the best way to get them.

Locate the yellow pollen inside of male flowers. Remove the pollen with a small, clean artist’s brush or break the flower off and carefully remove the petals. Roll the yellow pollen on the male anther onto the stigma in the center of the female flower. Pollen is sticky, so expect cucumber plant pollination to be a tedious and painstaking process. One male anther can pollinate several females. When completed, you have accomplished cucumber plant pollination. This process should be repeated for effective hand pollination of cucumber.

Once you have mastered the art of how to pollinate cucumber, look forward to an abundant crop. Techniques used in hand pollinating cucumbers also allow you to hand pollinate squash and melons in the same way.