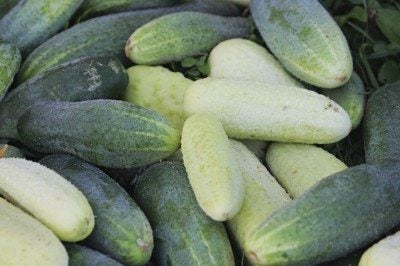 There are basically two types of cucumber plants, those that are eaten fresh (slicing cucumbers) and those that are cultivated for pickling. Under the umbrella of these two common cucumber types, however, you will find a wealth of different varieties suitable for your growing needs. Some may be smooth or spiny, some may have lots of seeds or very few, and some may be more vining in habitat or bushy. Learning a little bit about different cucumber varieties will help you to decide which is right for your needs.

Whether growing slicing or pickling cucumber varieties, both types of cucumber plants have the same requirements. Cucumbers thrive in fertile, well-draining soil in full sun exposure. These warm-season veggies should be planted after all danger of frost has passed in your area and the soil temps are at least 60-70 degrees F. (15-21 C.).

If you want to get a jump start on your cucumber crop, start seeds indoors 2-3 weeks prior to the actual planting date. Transplant the seedlings when they have at least two leaves but be sure to harden them off first.

Pickling cucumbers are usually shorter than slicing cukes, 3-4 inches (7.5-10 cm.) long with thin skins and spines. They often have striated skin coloration with gradations of dark green to light green at the blossom end. They are generally ready for harvest sooner than their slicing cousins but their harvest is shorter, about 7-10 days.

Slicing cucumbers bear longer fruit, around 7-8 inches (17.5-20 cm.), and have thicker skins than pickling varieties. More often than not their skin is a uniform dark green, although some cultivars have a stippled coloring. They fruit later than pickling cucumbers but bear fruit longer, for about 4-6 weeks. The cucumbers you see at the grocers are usually this type of cucumber. Sometimes referred to as American slicing cucumber, their thicker skin makes them easier to ship and their lack of spines is more appealing to many consumers.

Some people add a third cucumber classification, cocktail cucumbers. As you may have guessed, these are small, thin skinned fruits that are sometimes called “snack cucumbers,” as they are easily eaten in a few, crunchy bites.

Among both the slicing and pickling varieties, you will find spineless, thin skinned and even burpless cultivars.

Burpless cucumbers have been chosen because of their inability to cause gas build up, which for some people can be extremely uncomfortable. Cukes that foster gassiness in some people are high in cucurbitacins, the bitter compounds found in all cucurbits – cucumbers being no exception. It seems that seedless, thin skinned varieties have a lower cucurbitacin amount than their counterparts and are, thus, often termed “burpless.”

There are many varieties of cucumber often with their name a reference to the area of world they are most commonly cultivated.