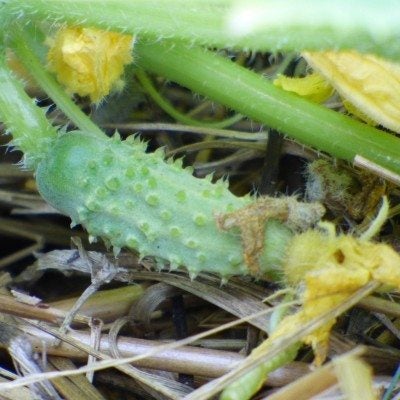 My neighbor gave me some cucumber starts this year. She got them from a friend of a friend until no one had any idea what variety they were. Even though I have had a veggie garden for years, I had never actually grown cucumbers. Really! So I plunked them in the garden and surprise! They were rapaciously producing spiny cucumbers. Well, I’d never seen spines on cucumbers since I usually get those smooth, consumer-ready grocery store cukes. So why did my cucumbers get prickly and are spiny cucumbers normal? Let’s investigate.

Why Do My Cucumbers Get Prickly?

Cucumbers are members of the Cucurbit family along with squash, pumpkins, and melons. They are divided into two groups: pickling and slicing varieties. Both varieties may have varying degrees of cucumber prickles – so prickly cucumbers is actually quite normal. Some might have tiny little hairs and others all out spines. The slicing varieties are usually less prickly while the pickling types are spinier.

Native to India, cucumbers may have become spiny for the same reason that some animals are camouflaged or have horns…to protect themselves from predators. This is no doubt the case with cucumbers.

If you sow your seeds indoors, start them two to four weeks prior to the last frost date for your area in a soilless potting medium. Be sure to harden the seedlings off before transplanting them.

If you are growing a vining type of cuke, be sure to provide some type of support.

Can You Eat Prickly Cucumbers?

Spines on cucumbers aren’t deadly, but they would be terribly uncomfortable to eat. The good news is that you can always peel a cucumber if the cucumber prickles are on the large side.

Most prickly cucumber fruit is just that, covered with minor hairy prickles. For these, a good washing will probably remove the prickles. If they won’t come off right away, use a veggie brush to remove them.

Oh, and this is interesting. I just read that the pristine, smooth cukes we are used to purchasing at the supermarket have spines. They are removed prior to selling to the consumer! Who knew? It should also be noted that some varieties today are bred to be spineless.