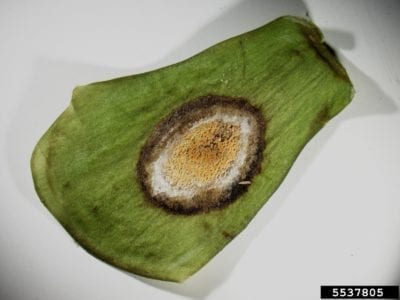 Anthracnose is a very common vegetable, fruit, and occasionally ornamental plant disease. It is caused by a fungus known as Colletotrichum. Eggplant colletotrichum fruit rot affects the skin initially and can progress to the interior of the fruit. Certain weather and cultural conditions can encourage its formation. It is very contagious, but the good news is that it can be prevented in some cases and controlled if confronted early enough.

Colletotrichum eggplant rot occurs when leaves are wet for a long period of time, usually around 12 hours. The causal agent is a fungus that is most active during warm, wet periods, either from rainfall in spring or summer or from overhead watering. Several Colletotrichum fungi cause anthracnose in a variety of plants. Learn the signs of eggplant anthracnose and what you can do to prevent this disease.

The first evidence of this disease in eggplants are small lesions on the skin of the fruit. These are usually smaller than a pencil eraser and circular to angular. Tissue is sunken around the lesion and the interior is tan with fleshy ooze which is the spore of the fungus.

When fruits are extremely diseased, they will drop from the stem. The fruit becomes dry and black unless soft rot bacteria get inside where it becomes mushy and decays. The entire fruit is inedible and the spores spread rapidly from rain splash or even wind.

The fungus that causes eggplant colletotrichum fruit rot overwinters in leftover plant debris. It begins to grow when temperatures are 55 to 95 degrees F. (13-35 C.). The fungal spores need moisture to grow. This is why the disease is most rampant in fields where overhead watering occurs or warm, rainfall is persistent. Plants that retain moisture on fruit and leaves for a long period promote growth.

Infected plants spread the disease. The eggplant anthracnose can also survive in seeds, so it is important to select disease free seed and not to save seed from infected fruit. Disease symptoms can occur on young fruit but are more common on mature eggplant.

In addition to careful seed selection, removal of the previous season’s plant debris is also important. Crop rotation can also be helpful but be wary of planting any other plants from the nightshade family where infected eggplants once grew.

Application of fungicides early in the season can help prevent many outbreaks. Some growers also recommend a post-harvest fungicide dip or a hot water bath.

Harvest fruits before they are overripe to prevent the spread of the disease and remove any that show signs of infection promptly. Good sanitation and seed sourcing are the best methods of colletotrichum control.