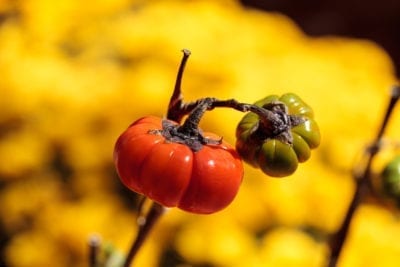 What is a Pumpkin on a Stick Plant?

A pumpkin on a stick plant (Solanum integrifolium) is not a pumpkin. As mentioned, it is a type of eggplant grown as an ornamental, but because of how it looks, confusion is inevitable. Part of the nightshade family and related to tomatoes, potatoes, and peppers, pumpkin on a stick looks exactly like small, orange pumpkins growing on a stick, albeit a stereotypically thorned eggplant stick.

Otherwise, the plant has an upright habit with large leaves. Both the stems and leaves have thorns. The leaves are dotted with small prickles and the stem with large purple thorns. The plant reaches a height of about 3-4 feet (around a meter) and 2-3 feet (61-91.5 cm.) across. The plant blooms with clusters of small, white blossoms that are followed by small, pale green, ridged fruit.

As if there isn’t enough confusion, the plant has a number of other names, among them Hmong eggplant, red China eggplant, and scarlet Chinese eggplant. This specimen was brought to the United States from Thailand by Vanderbilt University in 1870 as a botanical, ornamental curiosity.

How to Grow Ornamental Eggplants

Ornamental eggplant is grown just as you would any other eggplant or tomato. The plant likes full sun and well-draining soil. Start seeds inside about 6 weeks before the average last frost for your area with temps of at least 75 F. (24 C.). Place them on a heating mat or on top of the refrigerator and provide them with 12 hours of light.

When the plants have their first two sets of true leaves, harden them off in preparation for transplanting. Transplant after nighttime temps are at least 55 F. (13 C.). Space transplants 3 feet apart (91.5 cm.).

Once the transplants have been situated in the garden, ornamental eggplant care is fairly simple. Adjust the tying and staking as needed. Keep the soil moist and mulch around the plants to help retard weeds, cool roots and retain water.

Fertilize the plants as you would for tomatoes or peppers. Fruit should be ready to harvest about 65-75 days from transplanting. Be sure to dry the stems and fruit well. Hang the stems in bunches out in the sun or other warm but ventilated area until the leaves have died. Remove the leaves and display the stems in a dry vase or other container.