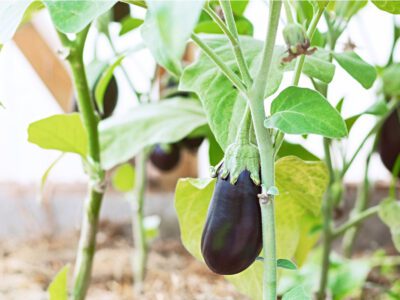 Verticillium wilt is a common pathogen among many varieties of plants. It has over 300 host families, spanning edibles, ornamentals, and evergreens. Eggplant verticillium wilt is devastating to the crop. It can survive for years in soil and overwinter even in severe weather regions. Plants in the nightshade family, such as tomatoes, eggplant, and potatoes are all adversely affected. The symptoms mimic those of several other diseases, so it is important to know them completely and make an accurate diagnosis.

Symptoms for Eggplants with Verticillium Wilt

Verticillium wilt in eggplants is caused by a fungus that lives and overwinters in the soil for years. It not only occurs in nightshades but also cucurbits, evergreens, herbs, flowering ornamentals, and even trees. The disease attacks vascular tissue, disrupting the movement of nutrients and water. Over time, the plant will become stunted, fail to produce useable fruit, and eventually die. The plant material is still very contagious and has to be destroyed rather than go into the compost heap.

Yellowing, wilting eggplants are the first sign that something is wrong. Young plants become stunted with leaves that are too small and yellowish-green. The disease can splash up on leaves, which means those closest to the soil line are generally first to show signs of infection. Leaves fade at the edges, roll inward, and eventually turn brown and dry. The disease will progress to other leaves and stems, and finally the root system.

The fungus produces a toxin that gums up the vascular system, preventing the movement of water. Unlike fusarium rot, yellows, and bacterial wilt, verticillium prefers to linger in temperate regions where the soil is cool. Vascular streaking in leaves and stems can help differentiate eggplant verticillium wilt from other common diseases.

Annual cleanup is an effective way of reducing the possibility of re-infection. Old plant material is a host for the pathogen and should be destroyed. Crop rotation may be beneficial, especially with nightshade hosts. Keep weeds out of the area, since some are also hosts to the disease.

As always, prevent contaminating fields by washing tires and cleaning tools and other equipment. Solarization of a soil area may also control the fungus.

If at all possible, get hold of resistant varieties. These will have a “V” marked on the seed packet. The cultivars ‘Classic’ and ‘Epic’ seem to have some good resistance to the disease.

Unfortunately, there are no easy-to-use chemicals to spray on your garden bed or field. After testing to ensure that the disease really is caused by verticillium, licensed applicators are required to handle the recommended chemicals. A soil fumigant is the most common application.

The fungicide, benomyl, has been shown to be useful as a transplant dip to reduce contamination but it is only useful initially and cannot protect roots after the plant has gone into contaminated soil.

Eggplants with verticillium wilt are difficult to treat. Better still are preventative measures such as resistant varieties, sanitation practices, sterilized soil, and removal of host plants.