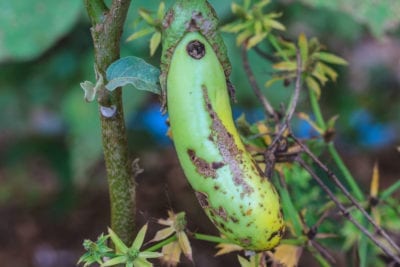 Eggplant is a commonly grown warm-season vegetable noted for its great flavor, egg shape, and dark violet color. Several other varieties can be grown in the home garden as well. They consist of various colors and sizes, all of which can add unique flavor to many recipes or as stand-alone side dishes. Eggplant problems and eggplant pests can occur from time to time when growing eggplant; however, with the proper care, they can usually be prevented.

Eggplants are cold sensitive and shouldn’t be placed in the garden too early. Wait until the soil has sufficiently warmed and all threat of frost has ceased. These plants require full sun and well-drained soil amended with organic matter.

When growing eggplants, space them about a foot or two (30.5-61 cm.) apart, as they can become rather large. Since eggplants are susceptible to many pests and diseases, the use of collars or row covers on young plants may be necessary to reduce common eggplant problems.

The best way to deal with eggplant bugs is by using collars and row covers until the plants are large enough to withstand attacks, at which time insecticidal soap can be used to alleviate pest problems.

To prevent eggplant bugs, it may also help to keep weeds and other debris to a minimum and rotate crops every other year or so. Introducing natural predators, such as ladybugs, often helps minimize eggplant problems associated with aphids.

Eggplant Diseases in the Garden

There are several eggplant diseases that affect these crops. Some of the most common include blossom end rot, wilt diseases, and various types of blight. Many of these eggplant diseases can be eliminated or prevented by practicing crop rotation, reducing weed growth, and providing adequate spacing and uniform watering.