Propagating Leeks: How To Grow Leeks From Seed Or Scraps 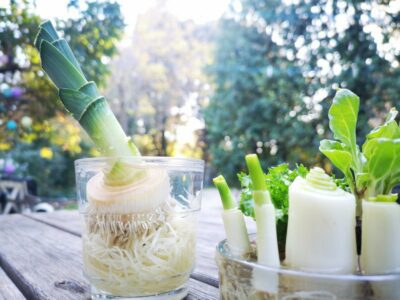 If you enjoy the mild, onion-like flavor of leeks, this member of the allium family isn’t as difficult to cultivate as you might think. You can even regrow leeks from table scraps. Plus, if you grow perennial leek plants, you’ll never have to replant the “gourmet’s onion” again.

Leeks are a cool-weather, long-season crop. They grow best when the ambient temperature is from 55 to 75 degrees F. (13-24 C.), but many varieties can withstand below freezing temperatures. Depending upon variety, leeks can take up to 180 days to reach maturity.

Growing leeks from seed is the most common method of propagation. In warm climates, leeks can be direct-seeded outdoors during the summer and harvested as a winter crop. In northern gardens, start leeks indoors 10 to 12 weeks before the last frost date.

When growing leeks from seed indoors, sow seeds evenly in open flats or place two seeds per cell in divided packs. Cover leek seeds with 1/4 inch (6 mm.) of fine soil and water well. Place planters in a warm, sunny location or under grow lights. Gardners can expect seeds to germinate in 5 to 14 days.

Transplant leek seedlings outdoors three to four weeks before the last frost. After acclimating the seedlings to the outdoors, space plants 6 inches (15 cm.) apart in 6 inch (15 cm.) deep holes. Water well, but don’t backfill the holes. This encourages the stems to swell and helps blanch the leeks.

Seeds are not the only method for propagating leeks. Gardeners can regrow leeks by cutting them rather than pulling the entire plant from the ground. Keep the roots watered and the cut leek will send up new growth. Both garden and store-bought leeks can also be regrown in a glass of water.

When growing leeks from scraps, be sure the roots are intact. Cut the stalk about 1 inch (2.5 cm.) above the root line. Place the root in a shallow dish of water so the top of the stem remains above the water line.

Place the glass in a sunny window and change the water every few days. New growth usually appears in about a week. You can replant the leeks in soil at this time or wait until they are a little further along.

Leeks are often considered a biennial as they bloom and produce seed in their second year. However, leeks are technically perennials. Winter-hardy varieties of leeks can return year after year. Follow these steps to create a patch of perennial leek plants in your garden:

Step one: Choose a sunny location with good drainage. The garden spot should be one which you don’t plan to till in future years.

Step four: The following year, the leeks will bloom. They will then divide and begin forming clumps. The second fall, harvest a few stalks from each clump.

Step five: As the clumps expand in subsequent years, you will be able to harvest more and more stalks. Be sure to always leave some stalks to maintain the clumps.

Printer Friendly Version
Read more about Leeks
<Previous
Did you find this helpful? Share it with your friends!
FacebookTweetPinEmail
Related Articles
Newest Articles
You might also like…
Additional Help & Information