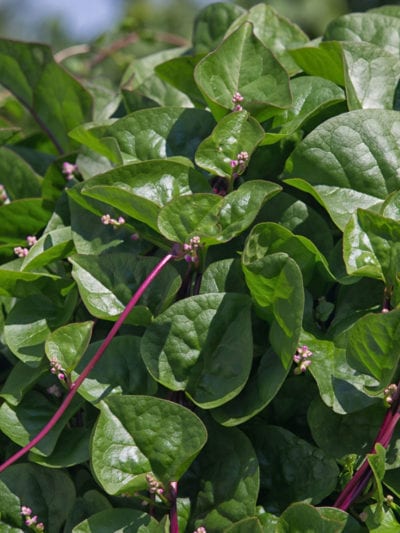 Malabar spinach plant isn’t a true spinach, but its foliage does indeed resemble that green leafy vegetable. Also known as Ceylon spinach, climbing spinach, gui, acelga trapadora, bratana, libato, vine spinach and Malabar nightshade, Malabar spinach is a member of the Basellaceae family. Basella alba is a green leaf variety while the red leaf variety belongs to the B. rubra species, which has purplish stems. If not spinach proper, what then is Malabar spinach?

What is Malabar Spinach?

Malabar spinach plants grow in India and throughout the tropics, primarily in the moist lowlands. While the dark green leaves resemble those of spinach, this is a vine type of plant that thrives in hot temps, even exceeding 90 F. (32 C.) Cool temperatures cause Malabar spinach to creep. It is grown as an annual, but grows like a perennial in regions that are frost free.

Malabar spinach will grow well in a variety of soil conditions but prefers a moist fertile soil with plenty of organic matter and a soil pH of between 6.5 and 6.8. Malabar spinach plants can be grown in part shade, which increases the leaf size, but it much prefers hot, humid and full sun exposures.

Malabar spinach also needs constant moisture to prevent the blossoming, which will turn the leaves bitter — ideally an area with a warm, rainy climate for optimal Malabar spinach care and growth.

The vine should be trellised and two plants are sufficient for most families through the summer and fall growing season. It can even be grown up the same trellis as peas, truly utilizing the garden space. Grown as an ornamental edible, the vines can be trained to climb over doorways. To prune Malabar spinach, simply cut the thick, fleshy leaves while retaining some stem.

How to Grow Malabar Spinach

Malabar spinach can be grown from either seeds or cuttings. If the stems are too tough to eat when pruning, simply put them back into the soil where they will re-root.

Scarify the seed with a file, sandpaper or even a knife to speed germination, which will take three weeks or longer at temperatures between 65-75 F. (18-24 C.). Direct sow Malabar spinach seeds in USDA zone 7 or warmer, two to three weeks after the last frost date.

If you live in a chillier zone, start the seeds indoors at about six weeks before the last frost. Wait to transplant until the soil has warmed and there is no chance of frost. Transplant the seedlings spaced about a foot apart.

Although when cooked it tastes much like spinach, Malabar spinach raw is a revelation of juicy, crisp flavors of citrus and pepper. It is delicious mixed in with other greens in tossed salads.

However you use Malabar spinach, this discovery is a boon for those of us that love our greens, but find the warm days of summer a bit too hot for their taste. Malabar spinach has its place in the kitchen garden, providing cool, crisp greens for the long, hot summer days.