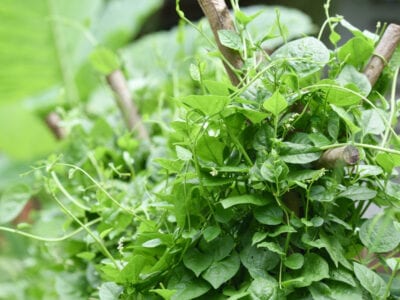 When warmer summer temperatures cause spinach to bolt, it’s time to replace it with the heat loving Malabar spinach. Although not technically a spinach, Malabar leaves can be used in place of spinach and make a lovely vining edible with bright fuchsia leaf stems and veins. The question is, how and when to pick Malabar spinach?

When to Pick Malabar Spinach

Both Basella rubra (red-stemmed Malabar) and its less colorful relative B. alba are herbaceous vines that can grow up to 35 feet (11 m.) in length in one season. Native to southeast Asia and sensitive to cold, both can be grown as an annual in temperate climates.

Malabar spinach grows well in soils ranging in pH from 5.5-8.0 but, ideally, moist, well-draining soil high in organic matter is preferred. It thrives in full sun but will tolerate light shade.

Start seeds indoors six to eight weeks before the last frost date for your area and then transplant outside when nighttime temps are at least a consistent 50 degrees F. (10 C.).

When can you begin harvesting Malabar spinach? Begin checking on the vine everyday beginning in the early summer. When the main stalk is strong and growing well, you can begin picking the leaves.

How to Harvest Malabar Spinach

There’s no trick to Malabar spinach harvesting. Just snip leaves and tender new stems 6 to 8 inches (15-20 cm.) long with scissors or a knife. Malabar takes to aggressive pruning and it will not harm the plant in any way. In fact, picking large amounts of the plant will only signal it to become even bushier. If you don’t want or don’t have the room for a lengthy vine, just harvest aggressively.

Malabar spinach harvesting has a lengthy season since snipping it back will only encourage more growth. You can continue to pick Malabar spinach as long as the plant is actively producing new shoots, all summer and into the fall, or until it begins to flower.

Flowers make way for a profusion of dark purple berries. They can be used as a food coloring for whip cream or yogurt.

The leaves and shoots from Malabar spinach picking can be eaten fresh or cooked as spinach. The flavor is not as bitter as that of spinach, however, due to its lower levels of oxalic acid. Most people who like spinach, kale, and Swiss chard will like Malabar, although others may not find it as appealing.

Younger leaves and stems are the most palatable. The older foliage has more high fiber mucilage, the same thing that gives okra its slimy character.