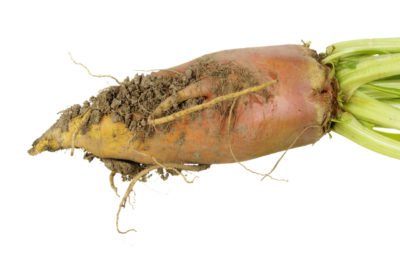 Have you ever heard of a mangel-wurzel, otherwise known as a mangold root vegetable? I must confess, I have not but it appears to be steeped in historical confusion due to its name. So, what is a mangold and how do you grow mangold vegetables? Read on to learn more.

What is a Mangold Root Vegetable?

Mangel-wurzel (mangelwurzel) is also referred to as mangold-wurzel or simply mangold and hails from Germany. The word ‘mangold’ means “beet” and ‘wurzel’ means “root,” which is exactly what mangold vegetables are. They are often confused with turnips or even “Swedes,” the British term for rutabagas, but are, in fact, related to the sugar beet and the red beet. They tend to be larger than regular beets, however, and reddish yellow in color.

Mangold root vegetables were primarily grown for animal fodder during the 18th century. That isn’t to say the people don’t eat them as well. When eaten by people, the leaves are steamed, and the root is mashed like a potato. The roots are also often shredded for use in salads, juices, or even pickled and are packed with vitamins and antioxidants. The root, also known as the “Scarcity Root,” can be used to make a healthful tonic by juicing the root and adding oranges and ginger. It has even been used to brew beer.

Lastly, the most curious and amusing thing about the mangold vegetables is their inclusion in a British team sport of mangel-wurzel hurling!

How to Grow Mangold

Mangolds thrive in soil that is high in composted material and has steady irrigation. When this is the case, the roots become soft and flavorful with a sweet flavor like beets. The leaves taste akin to spinach and the stems are reminiscent of asparagus.

Mangolds are propagated via seed, which can be stored for later use in the refrigerator for up to three years and still maintain viability.

These cool weather plants grow best in moist soil so provide them with at least an inch (2.5 cm.) of water per week depending upon rainfall. Plants will be ready to harvest in about five months.