What Are Cucamelons: How To Plant Mexican Sour Gherkins 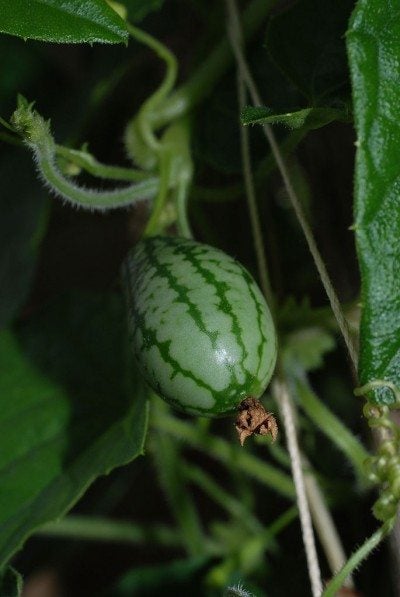 What looks just like a doll-sized watermelon, is actually referred to as a cucumber, but really isn’t a cucumber at all? Mexican sour gherkin cucumbers, otherwise referred to as cucamelon, mouse melon and in Spanish, sandita or little watermelon. What exactly are cucamelons and what other cucamelon info can we dig up? Let’s find out!

In flavor, Mexican sour gherkin cucumbers (Melothria scabra) are similar to cucumber with a fresh, tangy, succulent flavor. They can be used sautéed, pickled or fresh in salads with no need to peel the little beauties.

Cucamelon is not actually a cucumber. The Cucumis genus contains members of the gourd family as well as Cucumis sativus — or cucumber. Cucamelon is a member of the genus Melothria, which isn’t a true cucumber — just an honorary one, lumped into the cucumber category due to its similar habitat and flavor.

While growing Mexican sour gherkins has been fairly commonplace south of the border, until recently Cucamelon hasn’t been cultivated in the United States. The burgeoning popularity of farmers markets and personal gardening has brought a burst in recognition for these tiny treats. Intrigued? Then let’s learn how to plant Mexican sour gherkins in the home garden.

How to Plant Mexican Sour Gherkins

These open pollinated heirlooms can be direct sown in warmer regions in April or May or started indoors earlier for late spring transplantation. Select a site in full sun.

Thin the seedlings to 1 foot (.3 m.) apart when the seedlings are 4 inches (10 cm.) high. Pick the strongest seedlings and snip the rest with garden scissors. Set a cage around each seedling with a stake set on each side of the cage hammered into the soil and attached with garden twine. Mulch between the cages to repress weeds and retain water.

Water the plants at least once a week; the soil should be moist down to 3 inches (7.6 cm.) deep. Side-dress the plants six weeks after planting. Remove the mulch and lay a band of compost around the cages and water in to allow the nutrients to soak into the soil around the roots. Replace the mulch around the vines.

Harvest will occur in about 70 days when fruit is 1 inch (2.5 cm.) long and will continue through the fall. Cucamelon is more cold hardy than cucumber and has an extended harvest season with a profusion of fruit. Seeds can be saved for the successive year from ripe fruits that have fallen to the ground.

A prolific fruiter, Mexican sour gherkins are a fun, delicious option for the gardener. They are fairly drought tolerant, resistant to disease and pests, and are suitable for smaller spaces since the plant can be trained to grow up — all in all, a delightful addition to the garden.