Harvesting Orach Plants: How To Harvest Orach In The Garden 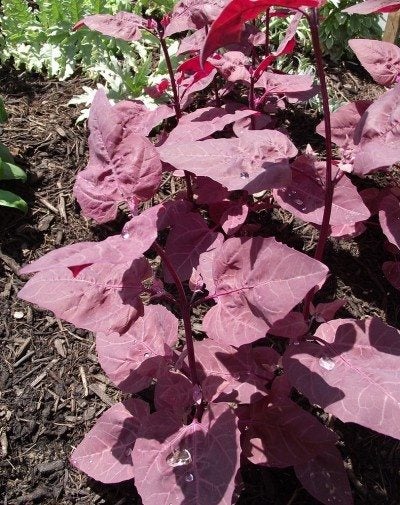 Looking for an alternative to humdrum spinach? Okay, spinach isn’t humdrum, but another green, orach mountain spinach, will give it a run for its money. Orach can be used fresh or cooked like spinach. Although it is a cool-season green, it tolerates warmer weather than spinach, meaning it is less likely to bolt. Also, orach mountain spinach comes in a variety of colors ready to enliven any recipe that calls for spinach. Interested? Keep reading to find out how and when to harvest orach.

Orach is an ancient crop entertaining a more recent resurgence in popularity. Botanically its name Atriplex hortensis comes from the French “arroche” and the Latin for “golden.” Orach can also be found under the common names of French spinach, German mountain spinach, Garden orache, or saltbush. It is a member of the Amaranthaceae family, the goosefoot subfamily, and so named due to the plant’s leaves, which look somewhat like the foot of a goose. Saltbush is in reference to the plant’s tolerance to saline and alkaline soils.

A hardy annual herb, orach grows up to 72 inches (183 cm.) in height. The flowers of orach are small and insignificant. The leaves are variously shaped and colored depending upon the variety with a flavor, when cooked, that is said to have a mineral flavor with a hint of fennel. Oh, and the color! Orach runs the gamut from brilliant magenta to eye-popping chartreuse.

When to Harvest Orach

Sow orach seeds in the spring as early as the soil can be worked, two inches apart in rows that are 12-18 inches (30.5-45.5 cm.) apart. Thinly cover them with soil. Keep the germinating seeds moist. When the seedlings are 6 inches (15 cm.) tall, thin the plants, spacing them 12-18 inches (30.5-45.5 cm.) apart. This is your first orach plant harvesting. Eat the tender thinned seedlings in a salad. In fact, orach is often an ingredient in the expensive microgreen mixes found at the grocers.

As to harvesting orach plants, plants mature between 30-40 days but, as mentioned, you can begin harvesting orach plants at thinning. Use the leaves in salads, as garnishes, as a cooked green, or stuff the leaves as you would grape leaves. Add a leaf to rice to turn it pink and astound the family. Toss into pasta or into soup; in fact, there is a traditional Romanian soup made of orach rather akin to Greek avoglemono, which is made simply with orach, rice, onion, lemon, and eggs.