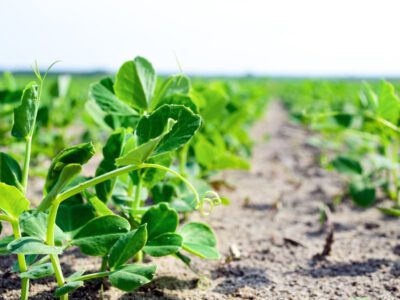 When you’re looking for something a little different not only in the garden but also your salad, consider growing pea shoots. They’re easy to grow and yummy to eat. Let’s learn more about how to grow pea shoots and the proper times for pea shoot harvesting.

What are Pea Shoots?

Pea shoots come from the pea plant, usually the snow or sugar snap pea varieties. Some varieties favored by growers are Snowgreen, a short vine cultivar; Oregon Giant, a disease resistant bush snow pea developed at Oregon State University; and Cascadia. They are harvested as young 2 to 6 inch (5-15 cm.) shoots, including two to four leaf pairs and the immature tendrils. They may also include small flower buds. Pea shoots have a subtle pea flavor and a light and crunchy texture.

How to Use Pea Shoots

Pea shoots can be used fresh in salads, which is gaining in popularity, or traditionally in stir-fry, as with many Asian cuisines. The Hmong people of southeast Asia were the first to introduce pea shoots in the Pacific Northwest, where a cool climate encourages ideal growth. Pea shoots are now popular fare at many restaurants and can be purchased at farmer’s markets all across the country.

Regardless of their use, pea shoots should be used within one or two days of purchase or harvest, as they tend to be quite delicate. Rinse your pea shoots in cool water and pat (or spin dry) while removing any damaged or yellowed tendrils. Store in the refrigerator much as you would lettuce or spinach.

An excellent replacement for spinach, pea shoots are high in nutrients. 2 cups (45 kg. ) has significant amounts of Vitamins A, B-6, C, E, and K. Pea shoots are also a terrific source of folate, thiamine, and riboflavin. As with many vegetables, pea shoots are low in calories with that 16 ounces weighing in at only 160 calories and zero grams of fat!

Pea shoots have a light, refreshing flavor and lend themselves well to a simple squeeze of lemon atop a bed of fresh shoots. As an interesting alternative or addition to traditional salad greens, pea shoots can be treated with any type of vinaigrette one would usually toss over a salad. Try them with a delicious combination of strawberries and balsamic for the freshest of spring salads.

Steam or stir fry lightly, due to their delicate consistency. Some dishes commonly call for ginger, garlic, and other Asian vegetables such as water chestnuts or bamboo shoots. Asian restaurants will sometimes substitute pea shoots versus cabbage as a bed for pork or shrimp.

How to Grow Pea Shoots in the Garden

To grow pea shoots in the garden, a cool climate is most advantageous where the average temperature hovers around the 65 degree F. (18 C.) mark .

Plant pea shoots just as you would other peas. Sow about 1 inch (2.5 cm.) deep, keeping 2 to 4 inches (5-10 cm.) between pea shoots. Pea shoots may also be grown as a winter crop in a greenhouse with supplemental lighting during the months of November through March.

You may begin harvesting your pea shoots about six to eight weeks after planting. Plants should be between 6 and 8 inches (15-20 cm.) tall at this point. Your first pea shoots of the season will be the pruned growth points plus one pair of leaves snipped to promote branching.

Continue clipping off the 2 to 6 inches (5-15 cm.) of re-growth at three to four week intervals. Choose pea shoots that are bright green, crisp, and unblemished. Pea shoots in the garden with buds and immature blossoms make for beautiful, edible garnishes or fresh green salads as described above.

Extend the life of your pea shoot plant by trimming it down to about 2 to 4 inches (5-10 cm.) tall in July. This will encourage the pea plant to reproduce a fall crop of pea shoots. The pea shoots in your garden may continue to be harvested until the shoots begin to taste bitter, generally later in the growing season.