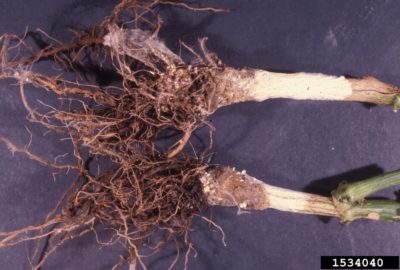 Pepper southern blight is a serious and destructive fungal infection that attacks pepper plants at the base. This infection can quickly destroy plants and survives in the soil. Getting rid of the fungus is nearly impossible, so prevention is key, along with using management measures if the infection strikes your garden.

What is Southern Blight of Pepper Plants?

Southern blight does not only affect peppers, but pepper plants are a target of this fungus. Caused by Sclerotium rolfsii, this disease is also known as southern wilt or southern stem rot. Other plants affected by southern blight include:

The fungus attacks plants initially on the stem, right at the soil line. One of the earliest signs of the disease is a small, brown lesion on the stem. You may later see a cottony, white growth around the stem near the ground, but symptoms also show up throughout the plant. Peppers with southern blight have yellowing on the leaves, which will eventually turn brown.

Eventually, the disease will cause the pepper plants to wilt. The other signs of the disease are not always easy to notice, so it is typical to identify the problem only once the plants have begun wilting. At this point, the health of the plants may decline rapidly. The infection may also spread to the actual peppers.

As with many other fungal infections, preventing pepper southern blight may be achieved by keeping plants dry, spacing them out to allow airflow, and having well-drained soil. The infection thrives in humid and wet conditions.

If you do get a southern blight infection in your pepper plants, it can wipe out your crop quickly. Management is a multi-year process that includes crop rotation. If you lose your peppers to southern blight this year, plant a vegetable that is resistant to it next year. Preparing the soil with a fungicide before planting each year can also help. Clean out plant debris thoroughly each year. Infected leaves and parts of plants can transfer the infection to healthy plants later.

A natural way to try to kill the fungus that causes southern blight is to heat the soil through a process called solarization. At 122 degrees Fahrenheit (50 Celsius) it takes just four to six hours to kill the fungus. You can do this by laying down clear plastic sheets over the soil in the summer. It will heat up the soil and is a practical strategy for small areas, like home gardens.

If you get southern blight in your peppers, you may lose all or most of one year’s harvest. But with the right steps between now and the next planting time, you can probably manage your garden and keep the infection in check.