Harvesting Hot Peppers: Tips For Picking Peppers That Are Hot 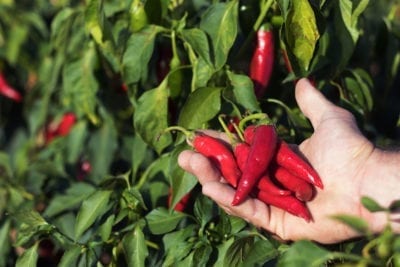 So you have a lovely crop of hot peppers thriving in the garden, but when do you pick them? There are several things to consider before you begin harvesting hot peppers. The following article discusses harvest and storage of hot peppers.

When to Pick Hot Peppers

Most peppers take at least 70 days from transplanting and another three to four weeks thereafter to reach maturity. Hot peppers often take longer. Be sure that you know what type of pepper you have planted and then look up the days to maturity. If you have a plant tag or seed packet, the planting time should be there. If not, there’s always the internet. If you have no idea what variety you are growing, you will need to ascertain harvest time by other means.

The days to maturity will give you a big clue as to when your hot pepper harvest will commence, but there are other clues as well. All peppers start out green and, as they mature, turn colors. Most hot peppers turn red when they are mature but they can also be eaten when raw. Hot peppers also get hotter as they mature.

Peppers can be eaten at most any stage of development, but if you want to be picking peppers that are as hot as they can get, wait on your hot pepper harvest until they are red.

Harvest and Storage of Hot Peppers

Peppers that have been harvested just as they begin to turn color will continue to ripen at room temp for three days. Those that are full sized can be eaten green.

Harvested hot peppers can be kept at 55 degrees F. (13 C.) for up to two weeks. Do not store them in temperatures that are cooler than 45 degrees F. (7 C.) or they will soften and shrivel. If your refrigerator isn’t set too cold, wash the peppers, dry them, and then store in a perforated plastic bag in the crisper.

If you find that you have a surfeit of peppers, too many to use quickly, try pickling them or freezing them either fresh and diced or roasted for later use.