What Is Capsaicin: What Makes Peppers Hot

Peppers
By: Becca Badgett, Co-author of How to Grow an EMERGENCY Garden
Printer Friendly Version 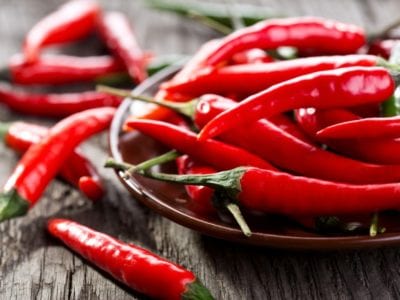 Most of us have taken a bite from a pepper that set our eyes to watering when we thought it couldn’t possibly be that hot and spicy. Other times, we’ve bought peppers for just that reason, only to get them home and find they’re not as powerful as we’d hoped. Why are they different, and how can we know ahead if each fruit has the desired amount of kick? Read on to learn what makes peppers hot and how this heat is measured.

Why Are Peppers Hot?

An ingredient called Capsaicin is what gives peppers their fiery spice. It is odorless and tasteless except for the hot element.  How little or how much of this substance each pepper creates within depends on different factors. These factors have long been the subject of much research.

Capsaicinoids are the chemical produced in fruits of the plant. It is an oil-like compound, repelling water and is primarily located in the membranes of the fruit, as well as more lightly in the flesh. It has been used for as long as 8000 years to flavor meats and vegetables and to help preserve food.

Capsaicin has medicinal uses as well, and was used as far back as the ancient Mayans for treating infected wounds, earaches, and  gastrointestinal problems. We continue to use it today as the primary ingredient in pain relief products such as gels, patches and ointments.

In fact, the interest in capsaicin and its development in pepper pods led to a scale with which to measure it, the Scoville Scale. This scale determines heat from the capsaicin in units called Scoville Heat Units (SHU). It is not extremely accurate in letting us know what type of heat we can expect from various strains of the pepper plant.

More recently, this scale has been replaced with a measuring system called “High-Performance Liquid Chromatography” (HPLC), which uses a machine to read the “chemical fingerprint of capsaicin in a pepper.” While this is useful to food scientists and researchers, it does not help us determine which pepper we want to purchase, grow, or even bite into.

Growing conditions can also determine the amount of heat held in the white membranes. Bell peppers do not produce capsaicin, but all other types can. If you wish to have an idea of how hot your peppers will be, learn names of those most sold in your produce section and research from there.

The same applies to growing peppers in your garden. While there are over one hundred varieties to grow and numerous types to purchase, it is helpful to learn the names and how much heat to expect from each. Learning to determine which Chili peppers spicy and which are mild is a good starting point.

The Poblano pepper is known to be relatively mild, measuring at about 2500 SHU. Some types are hotter. The Ancho chilies are dried versions of the Poblano. Forms of Chipotle are somewhat spicier, but still considered mild by professionals who use the scale. The Jalapeno is in the same category as the Chipotle, ranging from 2500 to 10000 units.

The Serrano and Cayenne peppers are further up on the SHU scale. Habaneros are hot. The Carolina Reaper is the hottest pepper on record.