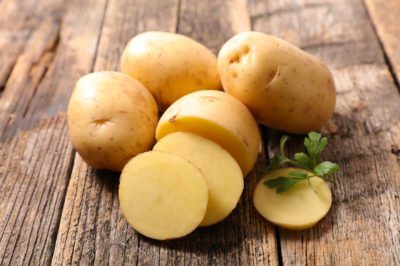 Americans eat a whole lot of potato chips and French fries – 1.5 billion chips cumulatively and shockingly 29 pounds (13 kg.) of French fries per U.S. citizen. That means farmers must cultivate tons of potatoes to satisfy our almost insatiable craving for salty spuds. In order to satisfy that need, potato growers produce massive quantities of tubers during the growing season and then cold store them. Unfortunately, this results in potato cold sweetening.

What is Cold Sweetening?

Cold sweetened potatoes are pretty much what they sound like. Potatoes have to be stored at low temperatures to prevent sprouting and minimize disease spread and losses. Unfortunately, cold storage causes the starch in the tuber to convert to glucose and fructose, or sugar. This process is called potato cold-induced sweetening.

Why is cold-induced sweetening a problem? French fries and potato chips made from cold stored spuds with excessive sweetening become brown to black when processed, taste bitter, and may have elevated levels of acrylamide, a possible carcinogen.

Cold sweetening is when an enzyme, called invertase, causes changes in potato sugars during cold storage. The potato becomes more comprised of reducing sugars, primarily glucose and fructose. When the raw potatoes are sliced and then fried in oil, the sugars react with free amino acids in the potato cell. This results in potatoes that are brown to black, not exactly a selling point.

Although studies have been done regarding the biochemical and molecular changes at play here, there is no true understanding of how this process is controlled. Scientists are starting to get some ideas though.

How to Prevent Cold Sweetening

Researchers at the Vegetable Crops Research Center Unit in Madison, Wisconsin have developed a technology that decreases the activity of invertase; they shut down the vacuolar invertase gene.

They were able to make a direct correlation between the amount of vacuolar invertase and the color of the resulting potato chip. A potato that had the gene blocked ended up being a normal, light-colored potato chip. Our hearty thanks and unending gratitude to these valiant souls who would not rest until they fixed America’s potato chip situation!

Preventing this in the garden is another thing altogether. The best solution is to store your potatoes in a cool (but not overly cold), dry area and not for an extended time period.

Although cold sweetening in potatoes isn’t much sought after, many root crops, like carrots and parsnips, actually benefit from this type of storage, becoming sweeter and tastier.