What To Do About Frost Damage On Potatoes 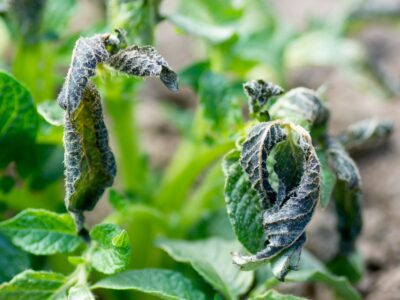 In the United States, potatoes top the charts as the most popular vegetable. Growing potatoes in the home garden is simple and these starchy tubers are easy to cure and store for use during the winter. Yet, one question often comes to the minds of potato gardeners. Can potatoes survive frost?

If you’re asking, “Can potatoes handle frost in the spring?” The answer is yes. Let’s say your newly planted seed potatoes have begun to send up stalks of green foliage when Mother Nature decides to play a trick on you. You wake up in the morning to an unexpected frost.

As you check your garden, you notice the above ground growth on the potato plants is damaged. A light frost may leave the edges of the leaves black, but a severe frost can kill the growth down to the ground. Should you replant? The good news is the seed potatoes in the ground are protected, provided you had a frost and not a freeze which penetrated the soil.

Will Frost Kill Potatoes in the Fall?

When gardeners ask, “Are potatoes frost tolerant?” they might be referring to the tuber, not the plant. In this case, the tuber is safe from frost damage as long as it is totally buried in the ground. If the ground should freeze, however, the potatoes can suffer damage.

Let’s say you had a short growing season with late spring and early fall frosts, or maybe life was busy and you planted your seed potatoes a bit late. Now that frost has killed back the foliage in the fall, should you harvest the potato crop?

Once the plant dies, the potatoes stop growing. If the potatoes are small, they can be immediately harvested and used as new potatoes. Full-sized potatoes can be left in the ground for two more weeks to allow the skins to harden and begin the curing process. However, if excess rain saturates the soil or the danger of a freeze exists, it’s best to harvest the potatoes as soon as possible.

Freeze or frost damage to potatoes (the tubers) can be hard to detect. Frost damage can occur when potato tubers are sticking out of the ground. The sun turns exposed potatoes green. Thus, any green potatoes which have experienced a frost event should be suspect. Potatoes close to the surface or in low areas are the next likely candidates for frost and freeze damage. Check the side of the potato which was closest to the soil surface for signs of mushiness or wrinkling.

The flesh or interior of frost-damaged potatoes often turns gray or reddish brown. This can present itself as spots or streaking when the potato is cut open. Freeze or frost damaged potatoes not only have a shortened storage life, but they will most likely turn black when cooked.

Thus, severely damaged potatoes should be discarded. Potatoes with light localized damage might be saved by cutting off the damaged portion and immediately using the undamaged sections. However, freezing converts starch to sugars. Potatoes which have experienced frost or freeze damage might have an oddly sweet flavor.