Grow Your Own Potatoes For Latkes This Hanukkah 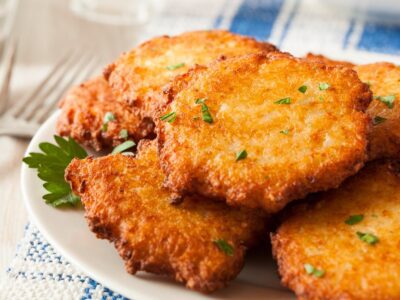 Are you planning on making potato latkes for Hanukkah? Steeped in tradition, the technique for making these crispy fried potato pancakes varies from family to family. Yet, one thing is for certain. Good latkes start with choosing the right potatoes.

What Type of Potatoes are Best for Latkes?

Most cooks agree, potatoes with a high starch content are a necessity when making latkes. Starch is the key ingredient to produce latkes which hold together when fried. Some cooks also add matzo meal to the shredded potatoes when making latkes. Others harvest the starch directly from the potatoes.

In addition to a higher starch content, these varieties of potatoes have a lower moisture and sugar level than waxy or all-purpose types of tubers. Less moisture means the latkes will become crisper when fried. Starchy potatoes also break down better when cooked, which makes for that ideal creamy texture inside the pancake.

If you know a little about potatoes, you could source them at your local grocery. The most common varieties of starchy potatoes sold there would be Russet, Idaho and Yukon Gold, with Russets being the most recommended for latkes.

Farmer’s Markets are another option. The vendors there grow their own produce and can be quite knowledgeable about the potatoes they sell. If you’d like to experiment with the taste and texture of your latkes, you are more likely to find a bigger selection of starchy potato varieties here than at your local grocery.

You might also consider growing your own potatoes for latkes. Potato plants grow from the eyes which sprout on potato tubers in late winter. Referred to as seed potatoes, pieces of potatoes containing eyes are planted in early spring. Caring for potatoes is not difficult, but they do require watering, weeding, hilling and fertilizing.

Seed potatoes are generally sourced in one of two ways. You can reserve a few of those special potatoes you purchased for latkes and encourage them to produce eyes. Or you could simply order seed potatoes from an online vegetable gardening catalog.

If you’re looking for an experimental type of potatoes for latkes, you may want to give these varieties a try:

How to Make Potato Latkes

Latkes are a blend of shredded potatoes, onion, eggs and seasoning. The amounts of each can vary, depending upon the recipe. Some recipes call for additional ingredients, such as matzo meal or bread crumbs. Here is a very simple one for you to try:

There are also many thoughts on the process of making latkes. If you’re wondering, “Should the potatoes be grated by hand or in a food processor?” or “Do you peel potatoes for latkes?” You’re not likely to find a definitive answer. It simply a matter of personal preference.

Beyond the choice of starchy potatoes, there is one hard, fast rule on which all latke chefs seem to agree. The liquid must be squeezed out of the shredded potatoes before cooking the latkes. Some recommend pressing the potatoes against a fine sieve, while others wrap the shreds in a towel and twist.

If you’re using the first method, you can catch the liquid and harvest the starch as it separates out and sinks to the bottom of the dish. This can be added back to the potatoes as a binder and thickening agent.

The steps for making latkes are pretty simple. Mix all the ingredients, except the oil, with the dried potato shreds. This mixture is spooned into a pan of hot oil and fried. The latkes can be turned once the underside is golden brown.

Once they are finished cooking, place the latkes on a paper towel to absorb the extra oil. Latkes are typically served with apple sauce or sour cream.

Printer Friendly Version
Read more about Potatoes
<Previous
Did you find this helpful? Share it with your friends!
FacebookTweetPinEmail
Related Articles
Newest Articles
You might also like…
Additional Help & Information