Types Of Potatoes – What Are Late, Mid And Early Season Potatoes? 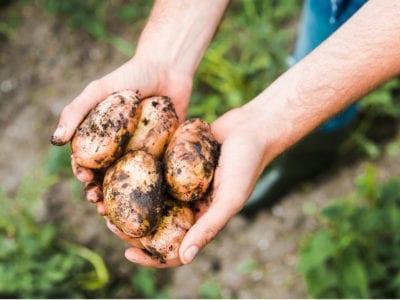 One of the most important staple food crops in the world, there are many different types of potatoes loosely classified between early season potatoes and late-season potatoes. Potatoes are a cool-season vegetable able to tolerate light frost in the early spring and able to grow during the cooler part of the growing season (during the fall months) in many areas of the country.

The portion of the potato plant which is harvested for food is called a tuber, not a root, and is often associated with the great potato famine in Ireland in the 19th century. Tuber formation occurs when soil temps are between 60 and 70 degrees F. (16-21 C.) and will fail to thrive if temperatures hit over 80 degrees F. (27 C.)

There are over 100 potato plant varieties with the most commonly purchased at the supermarket being the russet potato, specifically the Russet Burbank. Although more of us may buy Russet Burbanks, the precipitation flux and temperature of most of the country prohibits home garden production. Have no fear though; you are sure to find a type of potato among the 100 that is ideal for your home garden and climate.

Early season potatoes reach maturity within 75 to 90 days. One example of a tuber ideally suited for early season planting is the Irish Cobbler, an irregularly shaped variety with light brown skin.

You may also opt for the Norland, a red-skinned potato that is resistant to scab. Choose northern-grown seed potatoes for best results when planting in the early season, and of course, certified disease-free.

A hugely popular variety, the Yukon Gold is one of the trendiest yellow-fleshed varieties and has a moist, almost buttery flavor and texture. Yukon Golds have large, evenly sized and shaped tubers and produce not only a great early season harvest but the smaller plant size allows for closer spacing.

There are a plethora of mid-season potato types which mature between 95 and 110 days. The aforementioned Russet Burbank is an example of just such a variety and is ready for harvest after about 95 days.

Additionally, some other mid-season potato varieties to choose from are:

Types of potatoes suitable for planting during the latter part of the growing season (late summer into autumn) will mature in 120 to 135 days. One such varietal is the Katahdin, a light brown skinned spud which is resistant to some of the viruses, such as verticillium potato wilt and bacterial wilt, which may plague the potato grower.

Kennebec is another late-season potato plant variety as well as:

Another heirloom variety is called Green Mountain and is notable for its wonderful flavor. However, it has an indistinct shape and is no longer commercially produced but well worth the effort due to its dependable production.

Most fingerling types of potatoes are late-season potatoes as well.