Causes For Bitter Potato Skins: Learn About Green Skin On A Potato 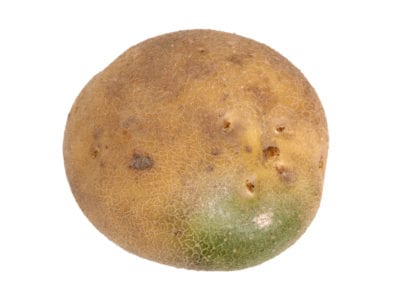 Green is symbolic of health, growth, and new life seen every spring when the first tender shoots thrust themselves up out of the still chilled earth, except when the green hue is detected in a potato. Whether russet, Yukon gold, or red all potatoes have the potential to turn green and, in this case, green is not a desirable color to behold. If your potato skin looks green, then keep reading to find out why this is and what can be done about it.

Why Do Potato Skins Turn Green?

Why do potato skins turn green? Green skin on potatoes is caused by exposure to light. Green potato skin may be caused when a potato is stored on the kitchen counter or window sill, or even when the potato is grown too close to the soil surface, hence the recommendation to grow potatoes in a mound and store harvested potatoes in a completely cool, dark area.

The green of the potato skin has a bitter taste when eaten. Bitter potato skin is only the most benign reason, however, not to eat spuds when the potato skin looks green. The green skin on potatoes comes from chlorophyll pigmentation. Chlorophyll in itself is not an issue, but it is the other response to light that occurs in a potato tuber which can be toxic.

When exposed to light, potato tubers also increase the production of the colorless solanine alkaloid. Solanine production and amount increase in direct proportion to the length of exposure and intensity of light. So this green potato skin has solanine in it which can be quite toxic.

The temperature during this light exposure of the potato is also a factor, as green potato skin is caused by an enzymatic process which increases as temperatures rise. Greening of potato skin does not occur when temperatures are 40 degrees F. (4 C.), as when storing in the refrigerator, and is most prone to occur when the temp is 68 degrees F. (20 C.). Higher temps do not induce green skin on a potato, however, the spud is more likely to decay.

Bitter potato skins are a warning sign that solanine is in high concentration in the spud. Consuming large quantities of solanine may cause illness or possible death. That said, toxic levels of solanine are 100th of an ounce for a 200 pound person, which translates to that person eating 20 pounds of whole potatoes in a day! I mention whole potatoes, as the green skin on a potato is the area with the highest concentration of solanine and thus, the most toxic.

To minimize any potential hazard, the green skin on a potato should be pared and any green tinged areas cut away. Also, remove any tuber eyes as they will also have the greatest amount of solanine. Generally, a rule of thumb should be: do not eat bitter potato skins.

How to Prevent Green Potato Skin

As mentioned above, a bitter taste in a potato is a warning of the presence of solanine and most folks are quite unlikely to consume such an unpleasant flavor. To further prevent the possibility of ingesting any toxic solanine, store potatoes in a cool dark place, wash well to expose any potential green skin on a potato, and cut away or pare any such areas, but specifically the peel and any eyes prior to cooking.

If for some reason potatoes need to be stored in a lit area for a short duration, dip them in a 3 percent solution of dishwasher detergent, one ounce (2 tablespoons) to a quart of water. Reportedly, this will protect the potato for a period of two to ten days.

I say find a cool, dark storage space to prevent green skin on a potato and the possibility of noxious amounts of solanine.