Potato Plants Not Producing: Answers To Why No Potatoes On Plants 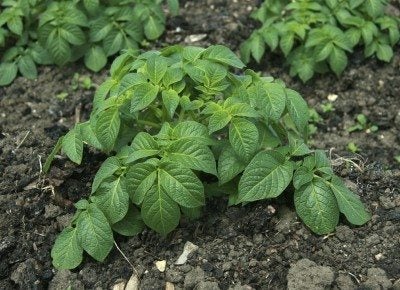 There is nothing in the world as disappointing as digging your first lushly leafed potato plant only to discover that your potatoes produced leaves but no crop. Low potato yields are a common problem of well-meaning, but inexperienced gardeners who over fertilize their crops in hopes of a big potato payoff. Fertilizing potatoes is a delicate walk between too much and too little — both situations could result in no potatoes on plants.

Reasons for Potato Plants Not Producing

Gardeners often go wrong when preparing their potato beds because they neglect to test the soil’s fertility before adding fertilizers or other organic material. A moderate level of fertility is desirable at planting time, especially if this isn’t the first time you were left asking yourself why no potatoes formed below those lovely, dark green potato leaves. When nitrogen, potassium, and phosphorus are in balance in moderate to high amounts, your bed is primed for planting.

During the first phase of potato growth, a lot of leafy vegetation is required so that in later stages the plant can make plenty of food to store underground in structures that will swell into potatoes. A balance of nitrogen, potassium, and phosphorus promotes the rapid development of healthy leaves and roots that reach deep into the soil to provide your potato with an abundance of building blocks and water.

Where many gardeners have gone wrong when their growing potato plants are not producing is around bloom time, when the potato tuber begins to bulk. Excessive application of nitrogen at this time will result in no potatoes on your plants or low potato yields. If your plants were planted in a properly fertile soil and given a side dressing of about an ounce of 10-10-10 fertilizer each when they were 8 to 12 inches (20-31 cm.) tall, no further feeding is necessary.

Why No Potatoes – Clues in Potato Leaves

It may be hard to tell what’s going on beneath the soil, but your potatoes will give you clues about their overall health. If you watered your potatoes deeply and often, and no black rot is making its way up the stem, the potato canopy can very reliably indicate the availability of nutrients in the soil. If caught early, you may be able to correct the issue and still harvest some potatoes.

Over fertilized potatoes, besides having lots and lots of very green foliage, may have leaves that emerge deformed or that roll up under stress because they’ve put everything they had into making leaves at the expense of roots. The canopy of under fertilized potatoes, on the other hand, turns yellow before browning and dying. Younger leaves may emerge pale green or even yellow with green veins, and may grow slowly or appear smaller than normal.

Use these clues to adjust your fertilizer program as necessary, giving an extra ounce of 10-10-10 fertilizer to yellowing potato plants and withholding any further fertilizer for those lush, over fertilized plants.