Pumpkin Varieties For Eating: Best Types Of Pumpkins For Cooking 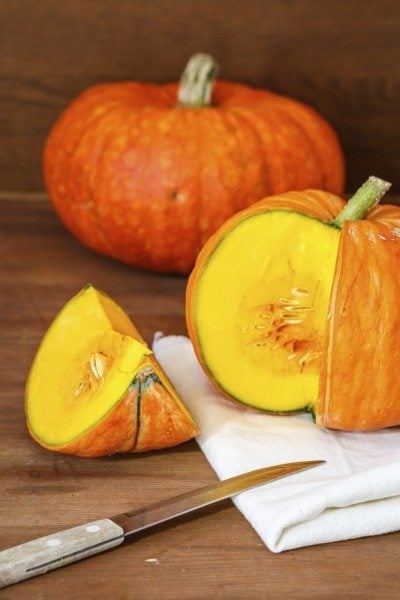 If you are of a certain, ahem, age, you may be very familiar with a wide variety of squash and edible pumpkins for cooking. If you are more recently hatched, Starbucks pumpkin spice latte and jack o’ lanterns may be as far as your acquaintance has gone. However, with the burgeoning popularity of farmer’s markets and personal gardening, a wide array of pumpkin varieties for eating is available. Let’s take a look at some of the different types of pumpkins for cooking.

Native Americans have long used edible pumpkins for cooking in everything from bread to soups and taught the newly arrived colonists many of their culinary tricks. Pumpkins can be grilled, baked, broiled, steamed or roasted whole in hot embers as the native people once did.

Pumpkins used for food differs from those bred for Halloween carving. Those pumpkins are bred to be large, mostly hollow, and flat bottomed. The flesh, however, doesn’t hold a candle to most of the pumpkin varieties for eating. It is watery and bland, although the seeds are excellent toasted. Decorative pumpkins of this ilk include Howdon Biggy and Connecticut Field.

The question of which are the best pumpkins to eat is a bit tricky. Why? Because the term pumpkin is a catch-all word that encompasses several types of winter squash. For example, Cucurbita moschata encompasses butternut squash, but it also includes the buff-colored Dickinson pumpkin, apparently “the pumpkin of choice for Libby’s canned pumpkins.”

This means that the types of pumpkins for cooking are really just hard-skinned squash. Take the more recently marketed Jack-Be-Little. This palm-sized specimen was introduced in 1986 and is most likely a forgotten acorn squash cultivar; it looks like a miniature pumpkin but tastes like acorn squash. Other small pumpkins that are delicious include Baby Pam, the white Baby Boo and New England Pie.

Types of Pumpkins for Cooking

And don’t forget those pumpkin seeds! They are loaded with fiber and protein. The oil from the seeds of the ‘Styrian Hulless’ pumpkin from Austria is touted for its dark, rich, flavor loaded with heart-healthy fats.