How Many Pumpkins Per Plant Can You Grow? 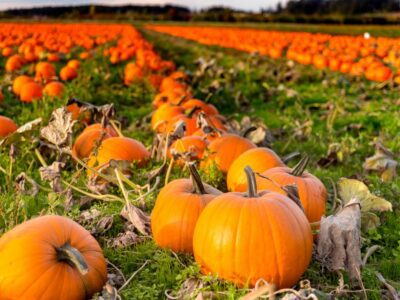 Pumpkin is a fun fruit to grow either for jack-o-lanterns or for holiday pies. If you are interested in trying your hand at growing your own you might be wondering how many pumpkins you get per plant. After all, knowing the number of pumpkins per plant will help you decide just how many plants to plant for your needs.

How Many Pumpkins Per Vine?

Scientists believe that pumpkins originated in North America about 9000 years ago. Since then many cultivars have developed, from tiny miniature fruit weighing about a pound (454 g.), to true monsters that weigh over 50 pounds (23 kg.) and potentially much more.

A general rule of thumb is that large fruiting plants produce only a couple of pumpkins per vine. On the other hand, the smaller varieties can produce 8-10 fruits.

How Many Jack-O-Lanterns Per Plant?

How many fruits are produced on pumpkins for carving? Howden, Tom Fox and Autumn Gold are all examples of cultivars popular in New England.

As you can see, the number of pumpkins produced per acre varies depending upon the type of fruit you grow. That said, the most common pumpkins grown on larger acreage are those that are to be sold as carving pumpkins with a median size of around 15 pounds (7 kg.). In this instance the grower can expect to yield 15,000-30,000 pounds (6804-13,608 kg.) per acre.