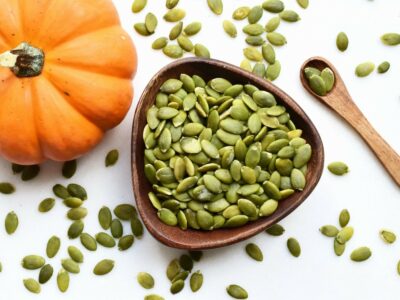 Perhaps you’ve seen pepitas at your local grocery store or found them in your granola. These tasty green seeds can be a bit pricey, so it’s natural for any gardener to wonder if growing pepitas in the home garden is possible. First, we need to figure out what they are.

You may have heard that “pepitas” is another term for pumpkin seeds. Yet, the pepitas at the store don’t look like the seeds that come from homegrown pumpkins. Pepitas have a fine papery skin, much like hulled sunflower seeds. So, are pepitas simply hulled pumpkin seeds?

While that seems logical, pepitas are not produced by hulling ordinary pumpkin seeds. Unlike the hard-shelled seeds that most gardeners find inside garden-grown pumpkins, pepitas come from a special type of winter squash called oilseed pumpkins.

These varieties are sometimes referred to as naked seeded, hulless, or Styrian pumpkins. They can be grown in the home garden and no specialized equipment is needed to remove the hulls. The seeds come out of the pumpkin bearing thin papery skins.

In many ways, cultivating a hulless variety of pumpkin is similar to growing ordinary pumpkins. Hulless pumpkins prefer a full sun location with well-drained, organically enriched soil. They take three to four months to reach maturity. The plant is susceptible to frost, but the fruit can tolerate short exposures of cold down to 28 degrees F. (-2 C.).

Unlike ordinary pumpkins, starting pepita plants from seeds takes a little bit of finesse. Without the protective seed coat, pepitas are much more likely to rot than ordinary pumpkin seeds. For this reason, gardeners who sow pepita seeds directly in the garden are advised to wait until the soil temperature reaches 70 degrees F. (21 C.).

A simpler method is to start hulless pumpkin seeds indoors using a soilless mix. Sow two to three seeds per pellet, peat pot, or cell. A heated mat may be necessary to keep the germination temperature at the desired 75 to 95 degrees F. (24-35 C.). Once the seedlings have emerged, they can be thinned to one per container.

Pepita plants started two to three weeks prior to the last frost date will be ready to transplant into the garden about two weeks after the final frost. The plants will need to be hardened off prior to transplanting in the garden.

Like ordinary pumpkins, plant pepita seeds or transplants in hills. Space the hills 4 to 6 feet (1-2 m.) apart or follow the variety-specific spacing guidelines found on the seed packet. Water, fertilize, and protect pepita plants from pests in the same manner as you would ordinary pumpkins.

You need not worry about keeping pepita pumpkins away from your carving and pie varieties. Cross pollination will not cause the seeds inside the pepita pumpkin to form a heavy seed coat. They will still be hulless, but any viable seeds may not produce true to type if you were to plant them the following spring.

Like ordinary pumpkin plants, pepita vines and foliage will begin to die back as the fruit nears maturity. Pepita pumpkins can ripen and cure in the garden. You can use them for fall decorating, then harvest the hulless seeds as long as the pumpkins haven’t started to decay.

To remove the seeds, cut the pumpkins in half and scrape out the seeds using a spoon. Rinse the seeds with water. Pepita seeds can be eaten raw, roasted, or dehydrated. They can also be frozen. Depending upon the variety, the flesh of pepita pumpkins can be eaten fresh or cooked.

There are several popular pumpkin varieties with hulless seeds. Look for these pepita pumpkin cultivars where garden seeds are sold: