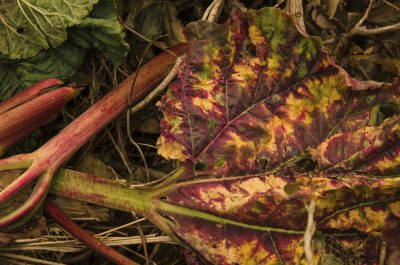 Can You Compost Rhubarb Leaves?

Rhubarb resides in the genus Rheum, in the family Polygonaceae, and is an herbaceous perennial plant that grows from short, thick rhizomes. It is easily identified by its large, triangular leaves and long, fleshy petioles or stalks that are green at first, gradually turning a striking red in color.

Rhubarb is actually a vegetable that is primarily grown and used as a fruit in pies, sauces, and other desserts. Also referred to as the “Pie Plant,” rhubarb contains vitamin A, potassium, and calcium – as much calcium as a glass of milk! It is also low in calories and fat, cholesterol-free, and high in fiber.

Nutritious it may be, but the leaves of the plant contain oxalic acid and are toxic. So, is it okay to add rhubarb leaves into compost piles?

How to Compost Rhubarb Leaves

Yes, composting rhubarb leaves is perfectly safe. Although the leaves contain significant oxalic acid, the acid is broken down and diluted fairly quickly during the decomposition process. In fact, even if your entire compost pile was made up of rhubarb leaves and stalks, the resulting compost will be much akin to any other compost.

Of course, initially, prior to the microbial action of composting, rhubarb leaves in compost piles would still be toxic, so keep the pets and kids out. That said, I’m guessing that’s pretty much a rule of thumb anyway– keeping the kids and pets out of the compost, that is.