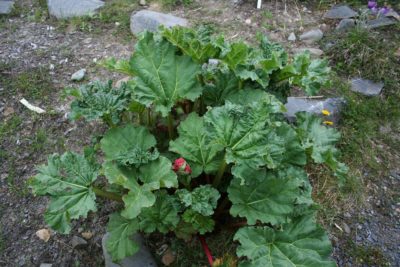 Rhubarb is not just a tart, pink plant that goes in pie with strawberries. It’s also a large genus of perennial plants, including some that are just as good for decoration in the garden as in a pie. If you aren’t necessarily a fan of the vegetable, but you want a pretty and exotic new plant for your garden, try Rheum australe. Also known as Himalayan rhubarb, care for this perennial is easy and comes with great rewards.

What is Himalayan Rhubarb?

Himalayan rhubarb is one of about 60 perennial plants in the rhubarb family. Nearly all of these can be eaten, including R. australe. The use of Himalayan rhubarb, though, is more often as a showy edition to ornamental beds. The plant is native to the slopes of the Himalayan Mountains and produces large, attractive, dark green leaves topped by dense clusters of reddish purple flowers.

You don’t need a lot of Himalayan rhubarb information to grow this pretty plant. Care is easy, and once you get it started, you’ll have year after year of gorgeous pink and green color for your garden with this impressive ornamental rhubarb.

How to Grow Himalayan Rhubarb

Growing Himalayan rhubarb is not difficult and requires little maintenance. It prefers soil that is well-drained and rich in nutrients, but unlike some plants, will tolerate heavy soils rich in clay.

Himalayan rhubarb will grow well in full sun, but also tolerates partial shade. It is fairly hardy and can thrive even in climates where the temperature drops down as low as -4 degrees F. (-20 C.). Himalayan rhubarb is also remarkably resistant to pests and diseases.

Himalayan rhubarb care is so easy that it makes a great plant for nearly any garden and for all gardening skill levels. It provides yearly ornamental vegetation and flowers, and if you feel so inclined, also provides edible stalks. Just remember that only the stalks of rhubarb are edible. The leaves and roots are toxic.