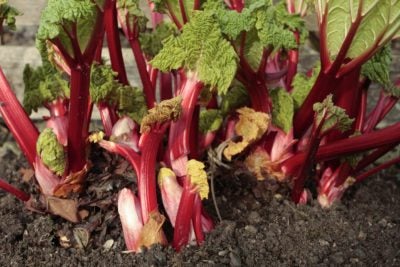 I love rhubarb and can’t wait to get at it in the spring, but did you know that you can also force rhubarb to get early rhubarb plant stalks? I confess I had never heard of rhubarb forcing, despite the fact that the cultivation method was developed as early as the 1800’s. If you are also clueless, read on to find out how to force rhubarb.

Rhubarb forcing can be done indoors or outdoors to produce a harvest out of season. Historically, West Yorkshire, England produced 90% of the world’s winter rhubarb in “forcing sheds,” but the home gardener can replicate forcing rhubarb in winter in a cellar, garage, or another outbuilding – even in the garden.

In order to produce by way of forcing rhubarb in winter, the crowns must go into a dormant period and be exposed to temperatures of between 28 and 50 degrees F. (-2 to 10 C.) for seven to nine weeks at the end of the growing season. The length of time the crown needs to be at these temps is called “cold units.” The crowns may go through cold treatment either in the garden or in a forcing structure.

How to Force Rhubarb Plants

When forcing rhubarb, you want the largest crowns; those that are at least three years of age. Dig the roots of the chosen plants up, leaving as much soil on the crowns as possible to prevent frost damage. How many plants should you force? Well, the yield from forced rhubarb will be about half that of the same crown grown naturally outside, so I’d say at least a couple.

Place the crowns into large pots, half barrels, or similar sized containers. Cover them with soil and compost. You can also cover with straw for extra frost protection and to help retain moisture.

Leave the containers of crowns outside to allow them to chill. Once they have gone through the required chill period, transfer the containers to a cool location, such as a basement, garage, shed, or cellar that has temperatures around 50 degrees F. (10 C.), in the dark. Keep the soil moist.

Slowly, the rhubarb will begin to grow stalks. After four to six weeks of forcing, the rhubarb is ready to harvest when they are 12 to 18 inches (31-46 cm.) in length. Don’t expect the rhubarb to look exactly like it does when grown outdoors. It will have smaller leaves and pink, not red, stalks.

Once harvested, the crown can be returned to the garden in the spring. Don’t use the same crown for forcing again two years in a row. Allow the forced crown to regenerate and gain energy naturally in the garden.