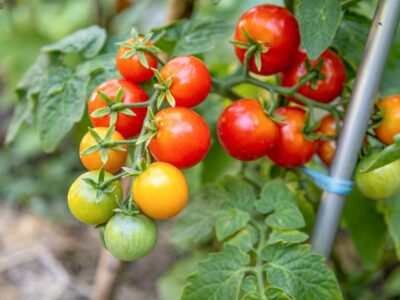 We’ve all seen “vine-ripened” tomatoes at the grocery store, often at a higher price than other tomatoes. Are vine-ripened tomatoes better, or is this simply a marketing ploy? What about home gardeners? Should they wait to pick tomatoes at the peak of ripeness?

The Science Behind Tomato Ripening

Most experienced gardeners can recognize when a tomato is about to ripen. As the fruit reaches its mature size, it changes from a vine-green color to a paler yellow or whitish green hue. This telltale sign is followed by blushes of pink or orange appearing on the blossom end of the fruit.

In commercial tomato production, there is a name for tomatoes which begin to show their mature color. They are called breakers or said to be in the breaker stage. Tomatoes at this stage are considered to be fully mature.

What many consumers don’t know is that tomatoes picked at the breaker stage can be legally marketed as vine ripened. These tomatoes are often sold in a cluster on a section of vine to further the illusion. Yet, many consumers and home gardeners believe picking tomatoes before they are ripe leads to a reduction in flavor.

From a scientific standpoint, the process in which tomatoes ripen would indicate this is not true. When a tomato reaches the breaker stage, it forms a layer of cells across the stem which effectively seals the fruit from the vine. The plant can no longer contribute flavor to the tomato.

Additionally, ripening is regulated by the production of ethylene gas inside the tomato. In other words, once a tomato reaches the breaker stage, it no longer needs the plant to ripen. So why do we associate tomatoes ripened on the plant with better flavor.

This could be due to the psychology of taste. Food that looks more appetizing is perceived to taste better. That’s why many restaurants pay close attention to how their dishes are plated when they leave the kitchen.

Should You Let Tomatoes Ripen on the Vine

Armed with this information, home gardeners may wonder, “Is it better to let tomatoes ripen on the vine?” As long as the fruit remains at a high quality, there is no harm in waiting until tomatoes are fully ripe before harvesting them.

Yet, there are times when gardeners must either pick tomatoes early or risk losing them altogether. Consider harvesting tomatoes in the breaker stage when facing these scenarios:

The Best Way to Ripen Tomatoes

Due to the production of ethylene gas, tomatoes ripen from the inside out. Those picked before they are fully ripe will continue to transition to their mature color and flavor. As the ideal temperature range for tomatoes to ripen is 68 to 77 degrees F. (20-25 C.), placing tomatoes on the kitchen counter is one of the best ways to hasten this process.

One of the advantages of picking home-grown tomatoes at the breaker stage is that gardeners are able to control the ripening process. By storing breaker tomatoes in a 55 degree F. (13 C.) fruit cellar or cold corner of the basement, gardeners can slow the speed at which tomatoes ripen. As a general rule, avoid storing tomatoes in the refrigerator as this results in bland, tasteless tomatoes.

It’s best to space stored breakers 1 to 2 inches (2.5-5 cm.) apart, but some gardeners prefer to wrap these tomatoes in newspaper or waxed paper and store them in a box. Either way, periodically inspect and remove any rotting tomatoes to prevent neighboring breakers from spoiling. Breakers can often be stored for several weeks, which means you might be able to have fresh homegrown tomatoes for Thanksgiving dinner.

Printer Friendly Version
Read more about Tomatoes
<Previous
Did you find this helpful? Share it with your friends!
FacebookTweetPinEmail
Related Articles
Newest Articles
You might also like…
Additional Help & Information