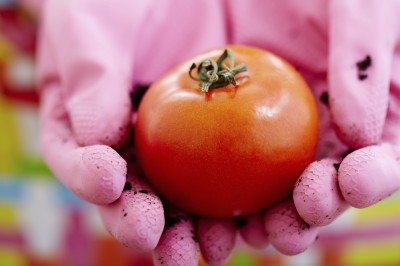 Have you ever heard that tomatoes can poison you? Is there any truth to the rumors of tomato plant toxicity? Let’s explore the facts and decide if this is an urban myth, or if toxicity of tomatoes is a valid concern.

Can Tomato Plants Poison You?

Whether or not the rumors are true, the idea that tomatoes might make you sick is understandable. Tomatoes are member of the nightshade family (Solanaceae) and, as such, are related to eggplants, potatoes, and of course, deadly belladonna or nightshade. These cousins all produce a toxin called solanine. This toxic alkaloid is part of the plants’ defense mechanism, making them unappealing to animals tempted to munch on them. All parts of the plant contain solanine, but the heaviest concentrations tend to be in the leaves and stems.

Tomatoes have a long, somewhat shady, history due to their association with nightshade. They are reputed to have been used in witchcraft and as an aphrodisiac and, thus, were slow to gain acceptance as a food crop.

All very interesting, but it doesn’t really answer the question, “Are tomato plants poisonous?”

Today, tomatoes are touted as extremely healthy food sources in large part due to their high concentration of lycopene, an antioxidant that has been shown to reduce the risk of cancer, cardiovascular disease, and macular degeneration.

While it’s true that tomatoes are members of the nightshade family, they actually produce a slightly different alkaloid called tomatine. Tomatine is also toxic but less so. However, when ingested in extremely large doses, it may cause gastrointestinal problems, liver, and even heart damage. It is highest in concentration in the leaves, stems and unripe fruit; ripe red tomatoes have very low doses of tomatine. This doesn’t mean that you should avoid fried green tomatoes though. It would take huge amounts of tomatine to make a person ill.

Note: Those suffering from autoimmune disorders should avoid digesting tomatoes and other members of the nightshade family, which may lead to issues with inflammation.

Tomatoes not only contain tomatine, but also a lesser toxin called atropine. There are some people who report digestive issues from eating tomatoes, especially when combined with hot peppers. There are also unsubstantiated reports of tomatine and a relation to arthritis, but again, these are unsupported claims. The effects, while unpleasant, are not life threatening. In fact, I could find no record of an actual poisoning due to tomato plant toxicity; solanine poisoning from eating green potatoes is more likely to occur (and even that is rare).

As far as the toxicity of tomatoes with regards to animals, again, very large amounts would need to be ingested. Tomato leaves have a distinct, pungent aroma and are also covered with prickly hairs which make them less than palatable to most animals. Tell that to some dogs or even cats who have a propensity for nibbling on any plant, especially when the animal is young. Tomato toxicity symptoms are more pronounced in dogs than in people, with a list of side effects that include nervous system issues to digestive ailments. It’s best to err on the side of caution and keep your pets away from your tomato plants.

Some individuals may be more sensitive to the alkaloids found in tomatoes and should avoid them. People on specific dietary plans or taking certain supplements may want to consult with a nutritionist or their doctor. For the rest of us, eat up! The benefits of eating tomatoes are many and the possibility of toxicity barely worth mentioning — unless, of course, you detest tomatoes and are looking for a way to avoid eating them!